World Series of Fighting announced that it has bolstered its roster of world-class athletes yet again with the signing of undefeated featherweight (145 pounds) champion Andre Harrison (14-0), to an exclusive, multi-fight agreement. 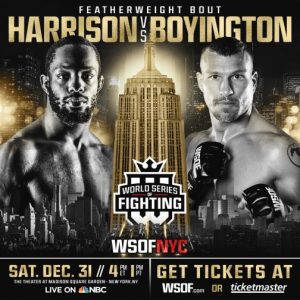 Harrison will make his debut under the World Series of Fighting banner, against Bruce Boyington (14-9) on WSOFNYC’s preliminary bout card on New Year’s Eve at The Theater at Madison Square Garden in New York City.

Tickets for WSOFNYC are NOW on sale and priced at $500, $250, $150, $75 and $50. Fans can purchase tickets online at Ticketmaster.com and WSOF.com as well as at the Madison Square Garden box office

Additional match-ups for WSOFNYC will be announced soon.