The following article has been submitted by a writer who chooses to remain anonymous.  The writer is part of a collective group of 14 individuals that would like to see appropriate changes made toward the progression of the sport of mixed martial arts and the governing bodies.

The Association of Boxing Commissions is the name best associated with regulatory control of combative sports throughout the USA, but how effective has that association become in their intended purpose in today’s landscape of modern combative competition?

Lets first discuss how the association was formed:

According to the ABC website: “The Association of Boxing Commissions is a North American not for profit governmental entity professional boxing and Mixed Martial Arts organization that provides a framework for undertaking boxing and MMA bouts and record keeping. It is made up of members from state and tribal athletic commissions from the United States and Canada and beyond.

The organization was formed in the 1980s when a number of executive directors of various boxing commissions met to discuss how boxing was handled in their jurisdictions. The Professional Boxing Safety Act then endorsed the ABC as the primary organization to help promote the elements of the Act.

The goals of the ABC are to:

On the surface, the intentions of the association seem admirable and much needed within professional combative sports nationwide but lets look into how effectively those goals have been met along with the consequences. Let’s keep in mind that the ABC is federally protected for the sport of Professional Boxing only under the ‘Professional Boxing Safety Act’- the individual state commissions can then choose or establish a requirement to follow ABC guidelines for any additional combative sports they see fit- or they can create their own which most have done.

The ABC has a written constitution posted on their website which all members are to follow. However, what are the consequences for those members who refuse to uphold the written requirements within their own states? Although it is written that a disciplinary committee exists, there have been no findings to show any action ever being investigated or followed under this committee.

We have spoken to multiple mixed martial arts promoters and athletes throughout the United States and there is a general concern that the authority given to oversee combative sports within many states have simply been given to state licensing boards to promulgate their own rules and regulations accordingly. The same licensing board staff who typically oversee the athletic commissions have little-to-no experience or interest in the sports in which they oversee yet are given full authority within the state jurisdiction. The staff (and directors) of these licensing boards many times also oversee additional market verticals such as Real Estate, Nursing, Contractors, etc., so many lack the experience and expertise heavily needed to support the combative sports industry safely and properly within their given jurisdiction. In many states, combat sports typically do not generate enough revenue to have full time oversight directly which leads to massively ineffective and unqualified support or massively increased rates to sanction. Therefore multiple state commission simply default to and look toward the ABC to help them effectively operate and establish guidelines to follow. Many of those states have established laws to set the ABC as the authority for rules and regulations to follow.

Lets briefly look into some of the individual goals within the ABC as written above:

Accurate records for the ABC are only kept IF the ones submitting them are paid members in good standing to the ABC. What about the states (or countries) who do not wish to fund the ABC memberships for MMA? What about the many highly qualified sanctioning authorities that the ABC will not ‘officially’ recognize that are legally licensed and given legal sanctioning authority within ABC member states such as the ISKA, UMMAF, AAMMA, etc. Are those records or athletes any less worthy of being protected by accurate records, uphold medical suspensions, etc? This is directly leading to a highly inaccurate and improperly used database. The discussion of the many international and national sport governing bodies who have the same issue with the ABC database would and could be an entire write-up in itself for another day.

Again this one goes to the above statements that the ABC really only has open communication between state commission but fails to recognize many of the most prominent sanctioning and regulatory authorities in the US and for that matter the world. How many international ABC certified trainers of officials do you see, regardless of their experience level?

This specific item happens virtually in no manner that we can tell. You can even look into such states like South Carolina who regularly refuse to adhere to Federal (and state) laws and ABC requirements by assigning uncertified officials in Pro Boxing (also Pro MMA but that isn’t federally protected). For instance we have a document in our possession showing that the South Carolina Athletic Commission allowed an uncertified Pro Boxing Judge (Shaun Woods) to obtain a state license just this month 5/18/18 on the day of an event as a Pro Boxing Judge without ever having taken a single certification class for Boxing, never passing a written examination for Boxing and no experience in boxing. Mr. Woods was personally selected and licensed by the SC LLR office to specifically judge a full professional Boxing card in the state of South Carolina going against Federal Law- Title 15 US Code Chapter 89 Section 6307h as well as many state laws and regulations. We wonder how many of the Professional athletes on the card were aware of the gross negligence on behalf of the SC LLR office? The ABC doesn’t seem to care to acknowledge those facts or address true problems involving its own members.  This link here shows names of all certified officials who have passed licensing credentials.  You will notice that as of today, May 30, 2018, Shaun Woods is not on the list. 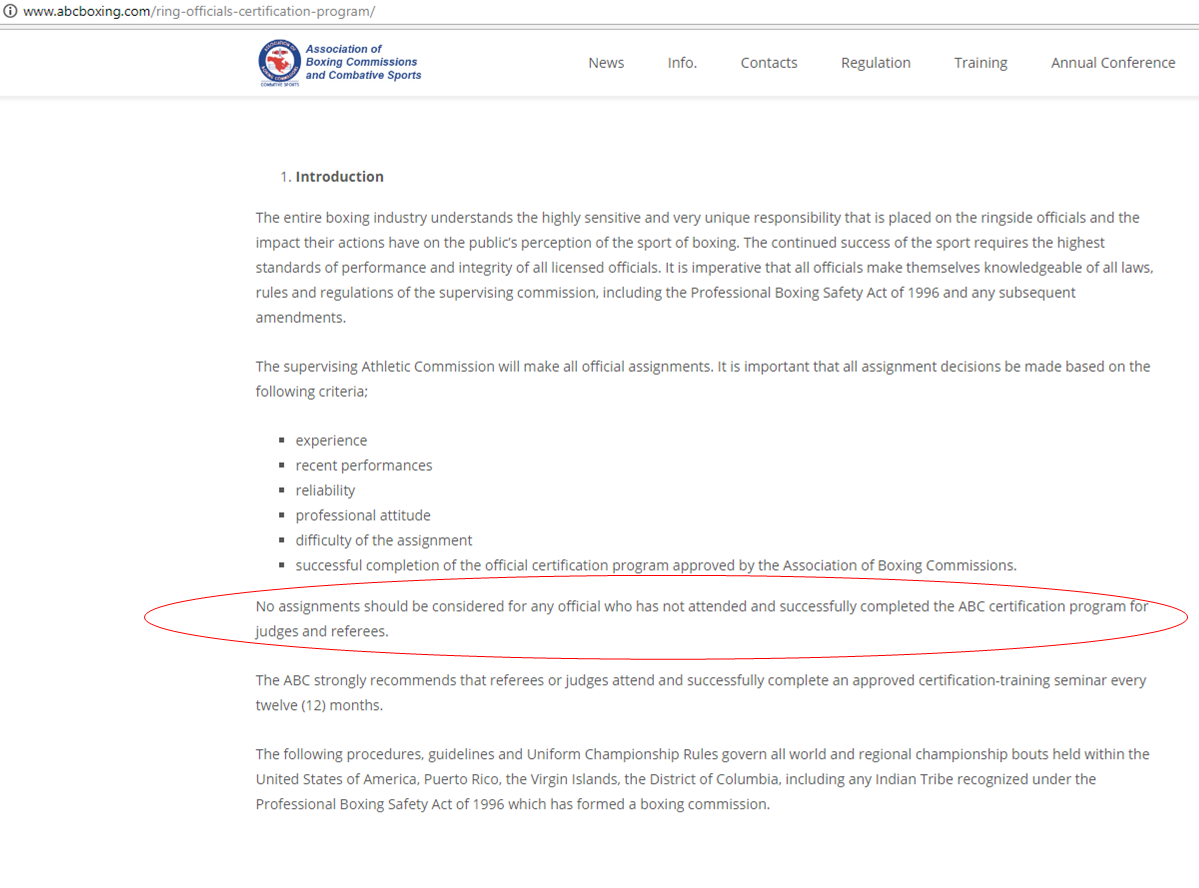 Lets take a quick look into the inability of the ABC to police their own members and trainers. By now most of the world has seen the article posted by MMAMadhouse and if not, I recommend you give it a brief read:

This write-up directly discusses misconduct, whether intentional or not, from a representative of the ABC. Mr. Blake Grice (ABC certified trainer of officials). The ABC has been made aware of the years of misconduct well before the above article was written and yet fails to uphold its own standards when it involves direct ABC personnel. After doing some of our own research here is another small example of the misconduct of just one bout we selected (of the many that exist) which shows the same two officials listed:

*Conclusion- was a split decision winner by the Red Corners (Blakes fighter) in what was arguably a very poor decision but the decision isn’t the key issue. Did these 2 officials attempt sway a decision or was it the incompetence of officials crew overall in the state of SC? Either way the unfair advantages given to a fighter by ABC trainer Blake Grice are clear. One Judge card in particular gave all 3 rounds a 30-27 scorecard winner to Blake’s fighter. We will let you take a wild guess which judge you think that was even after the Red corner barely surviving round 2.

NOTE: Please keep in mind this is only the angles and very short times that is shown on the video which is minimal. Based on many witnesses at this event, Blake talks to the assigned Judge Bradley Wade the entirety of the bout and in between rounds. He gives commands to his fighter throughout the entire bout (usually with his mouth covered by his hand). Blake’s conduct in this bout also goes against everything he is supposed to be teaching and stands for as an ABC trainer.

So what does the future look like for regulatory control of combative sports? Well with the onset of the newly established ACSC (Association of Combat Sports Commission) a now competing organization to the ABC, it will be interesting to see how that plays itself out.

The ABC has the longevity and majority support but with the proven inability to uphold standards that commission require, will this continue to open the door for the ACSC to take over majority which then negates the Professional Boxing Safety Act support of the ABC?

Many state commissions, tribal authorities and international regulatory bodies have already taken action to make a change away from the ABC. Keep in mind that neither of these associations have any real control or authority within a state commissions directly however can be indirectly supported as a regulatory body to follow by the local authority with jurisdiction over combat sports.

For the sake of standardizing Professional combative sports, we hope to see a single authority established and supported nationally/internationally one day with pride and personal relationships set aside for the betterment of all those in true support of integrity within combative sports.

The article above was been submitted by a writer who chooses to remain anonymous.  The writer is part of a collective group of 14 individuals that would like to see appropriate changes made toward the progression of the sport of mixed martial arts and the governing bodies.

By Blaine Henry 35 mins ago