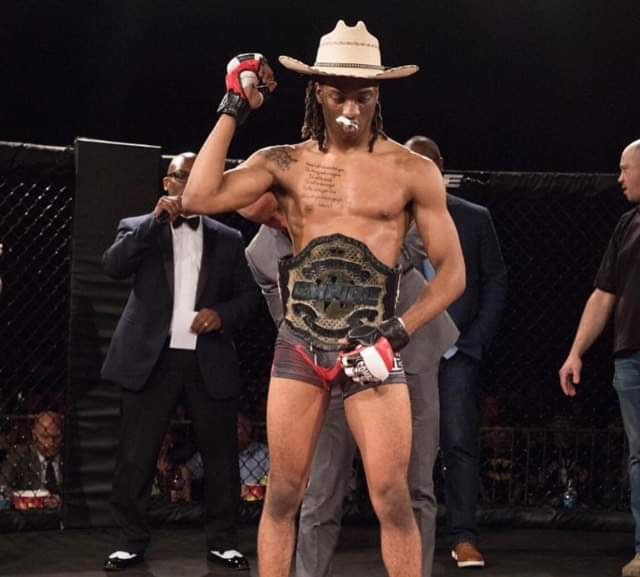 By now, it is well known that Louisiana puts out some of the best athletic talent in the world. There’s Karl Malone, Odell Beckham Jr., and Mel Ott to name a few. The UFC currently has two champions from the state of Louisiana as well. Daniel Cormier is the pound for pound number one fighter in the world. He has held two belts in two divisions. Even more recent, Dustin Poirier captured the second belt for the state. Nakia Brown is a great example of the young talent coming up in the state.

Nakia Brown has started his amateur career 6-0. Let me read off the list: doctor’s stoppage, 16 second knockout, 53 second knockout, rear naked choke, tko, and read naked choke. Nakia “The Great” is a finisher. He is the number one amateur featherweight in both Louisiana and Mississippi. We had the chance to talk with Nakia Brown ahead of his fight in Bayou FC, a Tim Credeur promotion, in Ponchatoula on May 18th.

“The Great” isn’t a nickname you give yourself, and Nakia didn’t take on the mantle either. It was given to him after his laundry list of finishes. “It was Matt Bricker and Dynamite. They were talking about it on Facebook [after the fight] and I said, ‘I’ll take that!’ So now, Brown has big shoes to fill. To be called great, you have to stay great. He plans to do that for some time.

Nakia just loves to fight. Just last week he entered a boxing tournament. “It was more of a brawl. Just went punch for punch.” While he didn’t win the tournament, he did enjoy himself and learned a bit. Brown is very good at looking back at what he’s done and fixing it. He’s all about putting in the hard work.

No rush to turn pro…

Going pro isn’t on Nakia’s mind just yet. He still thinks he needs work, specifically with jiu jitsu, and wants to stay at amateur a bit longer so he can get the experience he needs to succeed as a professional.

“I want to get in as many amateur fights as I can. I’m not really worried about it until T-Webb (Thomas Webb, his coach) says something. I know I need to get more jiu jitsu in before I get there.”

Since starting to compete in MMA in October of 2018, Nakia has fought 6 times, or as I like to tell him, “every other week.” He and his coaching staff believe that fighting this frequent when you can afford to make mistakes is crucial to the development of a fighter. After all, with the two quick knockouts, he has just over a round of cage time.

“I like finding my weaknesses. It’s a test for me. I feel like if I don’t fight I get a little lazy. I just like staying busy and staying active.”

While, he may not know exactly who he’s fighting, Nakia Brown knows he is just going to show up and fight whoever is in front of him.

Brown holds the Bayou FC amateur featherweight belt. “It’s a great feeling [having the belt.] It’s a lot, though. Once you’re at the top, it’s a lot to keep it up.”

Keep an eye out for Nakia. He’s a hot young prospect and will be looking to make another statement on May 18th! Thanks for reading!