This weekend, Anderson Silva returns to the boxing ring like Superman and looks to put an end to Jake Paul and his reign of terror on retired MMA fighters. Since up taking boxing, Paul has knocked out both Ben Askren and Tyron Woodley. Silva looks to become the man who puts a stop to all this tomfoolery and beat Jake Paul in boxing.

But how does he do it? The path is not as straightforward as one might think. Silva is 47 years old as compared to Jake Paul’s 25 years. He’s aging but he does have the opportunity for one last hurrah.

Catch Jake Paul and Anderson Silva live on FITE.tv this Saturday! Order and watch below for $59.99.

Jake Paul is a talented boxer. Now 5-0, this fight with Anderson Silva is technically him finally taking on a real professional boxer, albeit aging. For Silva, he will want to take Paul serious or he could face dire consequences.

When watching Paul fight, we see a jab and hook that he sets up comparatively well when you think about where he is as a boxer. A five fight veteran isn’t going to be a master of his trade and Paul is not even close to being that. But he’s caught fighters with these two strikes and put them away. Silva needs to be cognizant of this and look to avoid another Chris Weidman moment where he’s putting on a show and gets caught. God, Anderson, please don’t get caught… 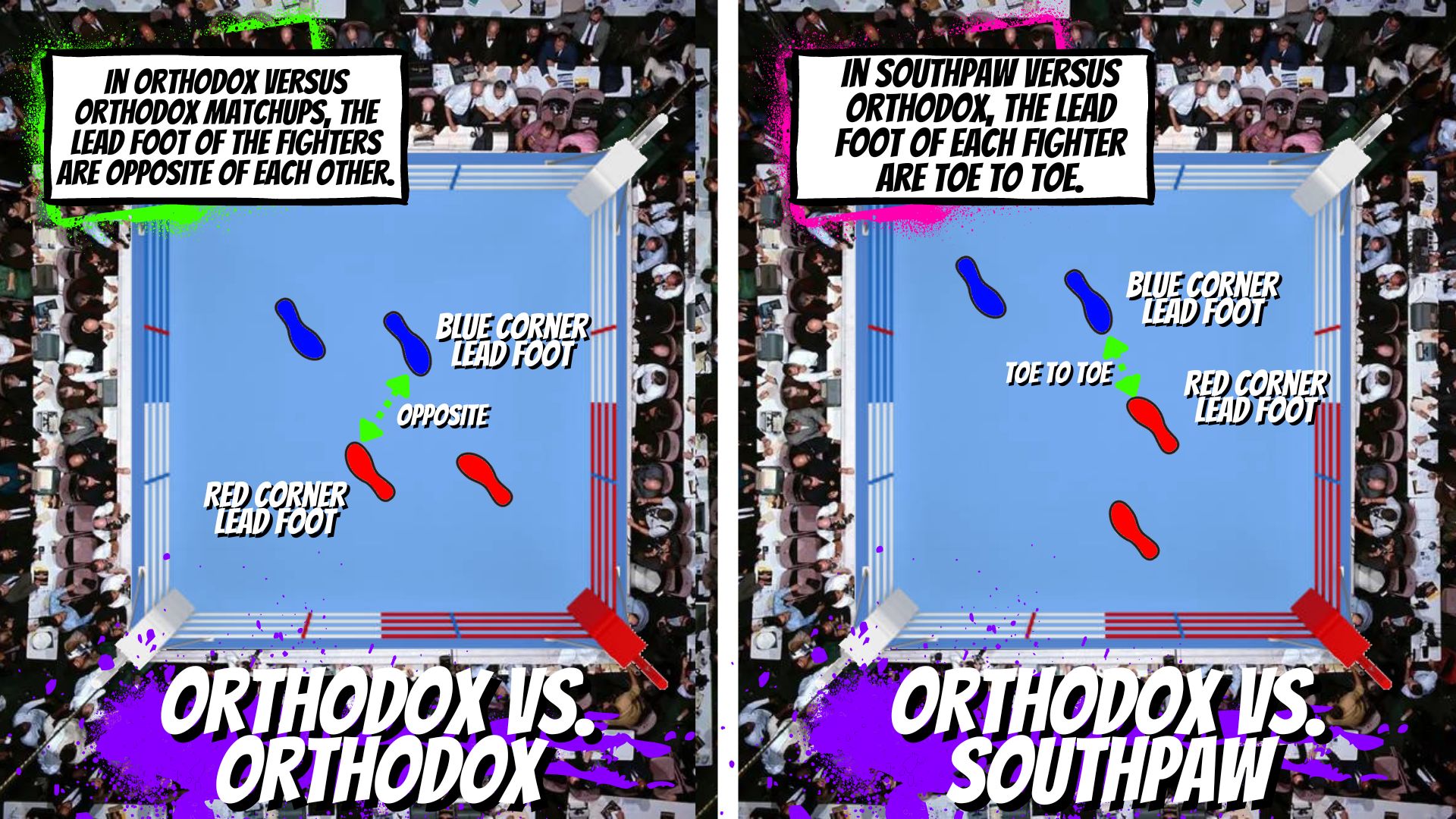 So let’s dove into the nuts and bolts of this upcoming matchup. Much has been made by Paul and his camp about Anderson Silva being the first southpaw fighter Paul will face. What is this, exactly? An orthodox fighter has their left hand and left foot forward with the “power hand” in the rear for maximum damage. A southpaw fighter puts their right hand and foot forward and the power hand forward. Now obviously, a left handed fighter will have their power hand be the left but the exception is not the rule.

So before we get into the who does what of the article, let me preface it by saying that while I will be speaking from a point of view that ponders what Anderson Silva can do to beat Jake Paul, with the mirrored nature of a southpaw versus orthodox matchup, Jake Paul can also do these techniques but mirrored to fight Silva.

So the first thing I want to address from Jake Paul is his right hook, his power shot. It’s the punch he used to knock out Tyron Woodley and Ben Askren. For Silva, I would like to see him approach this facet of Paul’s boxing with respect. Always a showman, Silva has been caught by Chris Weidman showboating. Instead, I’d like for Silva to acknowledge the right hook and neutralize it with the pivot.

Anderson Silva and the pivot 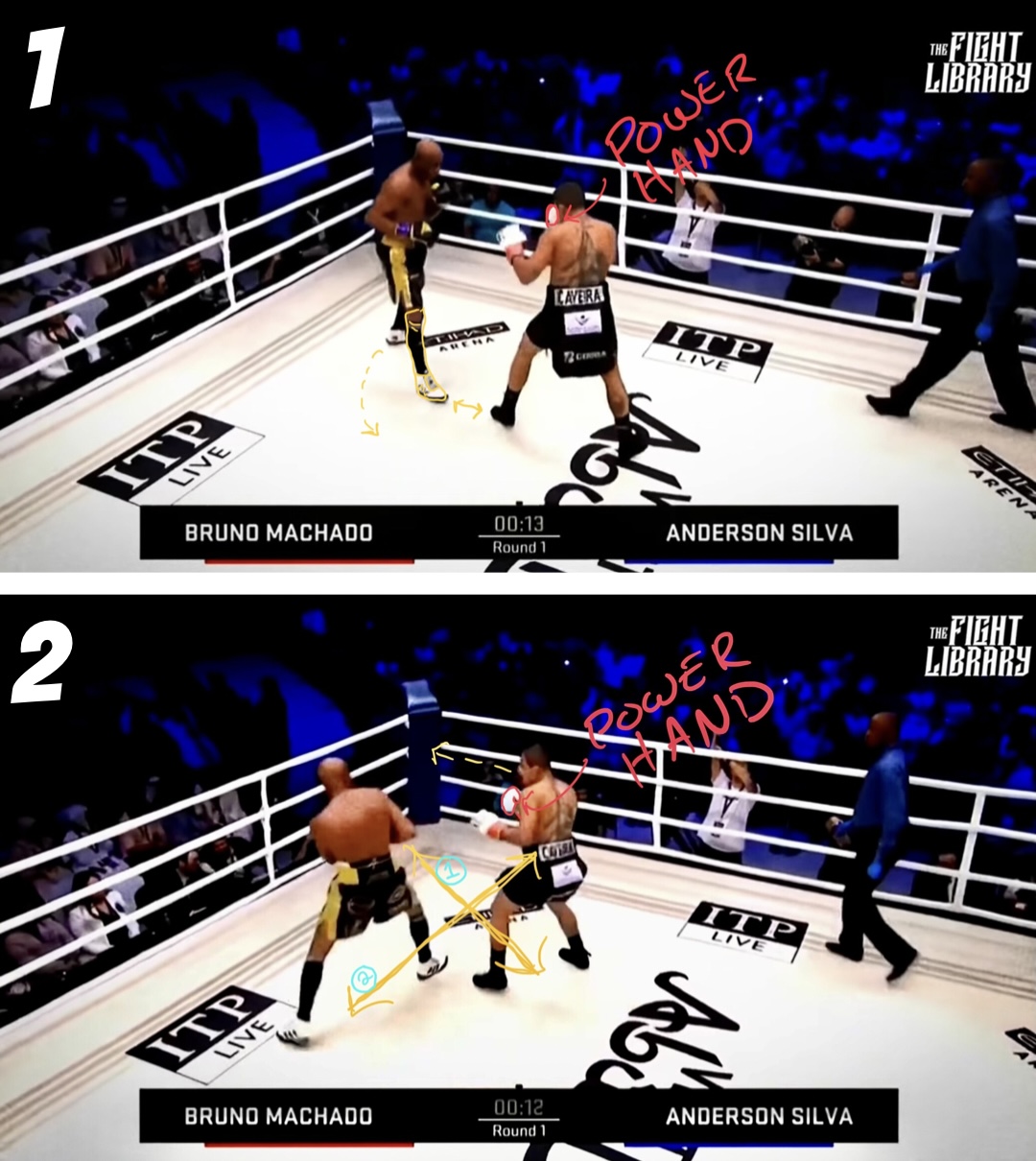 We’ve actually seen Anderson Silva use the pivot in his last boxing match against Bruno Machado in Abu Dhabi. In the diagram above we see Silva and Machado in the southpaw versus orthodox matchup we mentioned above. In many bouts, we often hear about the fighter wanting to circle away from the power hand of a heavy handed puncher. While circling is more common in MMA, in boxing, the pivot is far more useful for offense and is much quicker. In the first frame (1) we see Machado’s right hand is the power hand and Silva standing in front of his lighter opponent. He will want to pivot away from that power hand of Machado and away to (relative) safety. With the toe-to-toe nature of the southpaw versus orthodox matchup, Silva doesn’t have to move his lead foot and stay within striking distance of his foe.

Silva would do just that and (2) pivot out to his right by sliding his back foot around and pivoting on his lead foot to stay in the range while being off the center line from a big shot from Bruno Machado. A by product of the pivot is the angle. We can see in the second frame that Machado is facing the original position and Silva in a new, created angle, opening up some offense for The Spider.

Anderson Silva will want to do this against Paul who uses his right hook as his bread and butter. Taking that main weapon will also frustrate Paul who will be without his main weapon. This will dare Paul to find new ways to put opponents away.

Next thing for Silva, something he already does well, is controlling the lead hand of Jake Paul. With the nature of the stance matchup having the lead foots toe-to-toe, this also puts the jabbing hands up close and personal. Paul uses his jab to set up that right hook and he’s shown in his pre workouts that he’s worked on his jab, which isn’t a bad idea on it’s own. But with Silva being a southpaw, he can control the lead hand with his own.

As Paul reaches out to paw with his jab, another tendency of his, Silva can put his on top, pawing it down, and negating the jab, further frustrating Paul and disrupting the rhythm to set up his right hook. (I’ll show you a diagram on this later on in the article). Lastly, the outside foot advantage is another area of interest for Anderson Silva. Now, the outside foot advantage is more of a rule of thumb and nothing hard lined, against the young and inexperienced Paul, controlling the outside foot will allow him to pivot out, get off shots and stay out of danger for the most part of the fight.

Putting it all together

Taking these tools into account, Anderson Silva can show the boxing world the maestro he truly is. And to see how all these tools work together, we look to a top level boxer in Shakur Stevenson. A southpaw himself, Shakur Stevenson uses the pivot, outside foot advantage, controlling the lead hand and more to shine in almost every boxing match he’s been involved in.

In his last fight against Robson Conceicao, Shakur Stevenson utilized all the weapons we’ve discussed and dominated his short-notice opponent. In the first frame (1) Shakur Stevenson has the distance already figured out. He goes to engage and plans to step to the outside of Conceicao’s lead foot, staying away from his opponent’s power hand. Now with the advantage (2), Stevenson sees the jab coming and uses his lead hand to paw down the jab of Conceicao. (3A) Knowing a right is likely coming from Conceicao, Stevenson keeps his left hand up and protecting his chin. (3B) To create a new angle, Stevenson will pivot out to his right and open up the angle to land to the body of Conceicao.

Now that he’s pivoted out (4) we can see Conceicao is completely out of position and Shakur is free to fire. Notice how Shakur isn’t off balance and he’s completely over his two feet, allowing for the most power in the punch. Stevenson decides (5) to land a huge left hook to the body, a crippling blow for any boxer and one that Silva can use to land up top or to the body, gassing out Jake Paul even further.

For Anderson Silva, this could be the last time he’s in the limelight and could be, ironically enough, a legacy defining moment for the Brazilian MMA champion. A defeat over Jake Paul would be seen as a moral redemption for MMA fighters in the boxing ring. Can he turn back the clock and give us one more electrifying performance?

By Cole Shelton 56 mins ago