On November 4, Michael Schiavello and UFC Hall of Famer Pat Miletich will be calling the action when AXS TV lands at Plymouth Memorial Hall in Plymouth, Mass., for CES MMA 39, with red-hot middleweights Chuck “Cold Steel” O’Neil and Wilfredo “The Brown Bomber” Santiago facing off in the main event. 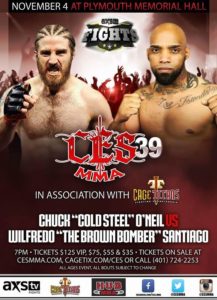 Riding a two-fight win streak in the CES MMA cage, former Welterweight Champion O’Neil is hunting for his third straight impressive victory. Hot on the heels of three first-round finishes, Santiago is confident he’ll continue his trend of quick stoppages in his long-awaited return to the CES MMA cage.

A win for either fighter puts them in line as a contender for the CES MMA Middleweight Championship and a call from the UFC. Both fighters understand what’s at stake and both intend on ending the main event with an exclamation point.

“Wilfredo is a guy who likes to go out there and throw bombs. He’s got a heavy right hand and he’s going to try to hit me in the head with it. I’m going to try to slam him in the head,” offered O’Neil, who’s making his 11th trip to the CES MMA cage. “I’m not going to force anything, but I’m going to be very aggressive and finish this fight impressively.”

Santiago, a Jackson Wink MMA Academy product, has other plans.

“I’m really excited to be back for CES MMA. Not many people have seen my improvements since I last fought for them. I finished my last fight in two minutes, so nobody has really seen what I’m capable of doing now,” said Santiago, a product of Lawrence, Mass., who trains out of New Mexico. “I’m comfortable everywhere, and I can finish the fight anywhere. I’m going to show that on November 4 in Plymouth and stake my claim as New England’s top middleweight.”

“Our goal was to have two events in Massachusetts by yearend. When the opportunity presented itself to work with Mike Polvere and the crew at Cage Titans FC, we knew it would be a night of unforgettable action,” stated Burchfield Jr. “Mike does an incredible job and Plymouth Memorial Hall has such a great fight history. A lot of the CES MMA fighters initially made a name for themselves at Cage Titans FC. We’re excited to be showcasing more of the East Coast’s best talent.”

By John Eric Poli 47 mins ago