Phumi Nkuta dethroned Alberto with his striking and wrestling on his way to a dominant unanimous decision win to become the new CFFC flyweight champion. Said Kakhramonov captured the vacant CFFC bantamweight title as he knocked out Tycen Lynn in the second round. 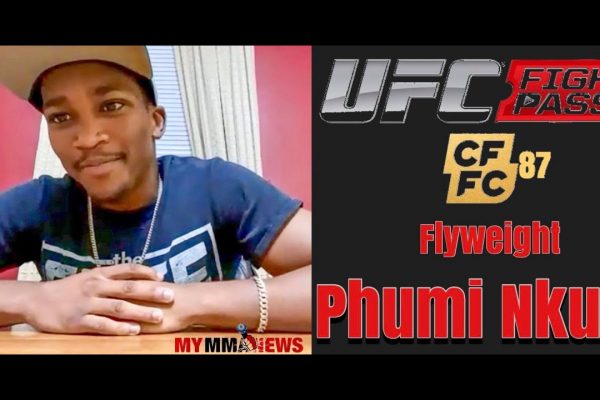 It’s a night dedicated to the lighter divisions with five total bantamweight bouts and a flyweight title fight.

The CFFC flyweight champion Alberto Trujillo makes his first title defense against the unbeaten Phumi Nkuta inside the 2300 Arena in Philadelphia, Pennsylvania. The promotion will crown a new bantamweight king as Said Kakhramonov takes on Tycen Lynn in the co-main event.

Trujillo is no stranger to facing the unbeaten. He handed the former champion Santo Curatolo his first defeat with a second-round TKO at CFFC 87 this past October. He is the winner of his last two appearances. His last defeat was a unanimous decision loss to Joao Camilo at Conbate 33 in March 2019.

Nkuta makes his first championship-bout appearance with two professional bouts to his name. He most recently submitted Ben Coyle via second-round americana at CFFC 87. His only other victory is a unanimous decision nod over Adrian Haly at Bellator 231 in October 2019.

Kakhramonov competes for the first time in over a year. He most recently knocked out former UFC signee Askar Askar via a 39-second knockout at HFC 42 in February 2020.

His only professional defeats came to Pipe Vargas and UFC bantamweight Umar Nurmagomedov.

Mark Grey’s wrestling made the difference in a dominant three-round decision victory against Gabriel Cabello.

Bickhart made her game plan clear in round one.  The Pennsylvania native attempted three different arm0bar attempts in the opening round.

Round two told another story as both girls seemed content to stand. Brister changed momentum as she landed more volume than Bickhart. Brister capped off round two with a late takedown.

Brister showcased her striking in round three as well. Both women traded, but Brister proved to be a step ahead on the feet.

Brister moves to 2-1, while Bickhart drops to 0-1 in her amateur debut.

Cameron Allgeier’s two round lead was enough to earn a unanimous decision win against Christian Bobe.

Allgeier brought the pressure in rounds one and two, but Bobe came out as the fresher fighter in round three. Bobe tagged Allgeier in the third, but a takedown from Allgeier gave him time to compose himself.

Allgeier stays unbeaten at 4-0, while Bobe falls to 4-2

BJ Young stuck to his wrestling on the way to a unanimous decision win against Geoffrey Mellor.

Young avoided a few submission attempts as he controlled Mellor on the ground after scoring an early takedown in the first round.

Young dominated with his wrestling in round two.Mellor dropped Young with a right hook int he second round. Young scored a takedown to survive the round.

Young stuck to what he knows best and outwrestled Mellor int he final round.

Bryan Bautista found the rear-naked choke in the second round against William Tucker.

Bautista rocked Tucker int he second with an overhand right. Tucker survived the early onslaught, but then gave u his neck. Bautista locked in the choke and earned the tap shortly after.

Tom Pagiliarulo defeated Shawn Stefanelli via second-round TKO after Stefanelli’s corner through in the towel during round two. Pagiliarulo picked apart Stefanelli on the feet and ground.

Grigoriou started to fade away and Rodriguez poured on his stand up. Referee Bill Bookwalter warned Girgoriou to stay busy, but eventually Bookwlater stepped in.

Grigoriou contested the stoppage. Rodriguez remains unbeaten at 5-0, while Grigoriou drops to 4-3.

Tanner relied on his wrestling to maintain control throughout all three rounds. During the second round, Tanner took Bartholomew to the mat early. Although Tanner was not active with his ground and pound, he maintained control.

Tanner earned two more takedowns in the third to seal the victory. Tanner was not active with his ground and pound, but he maintained control. Bartholomew locked in an arm-bar, but Tanner was saved by the final bell.

Tanner remained undefeated at 5-0 and Bartholomew falls to 7-4.

Said Kakhramonov rocked Lynn early in round two with a right hand. He eventually let Lynn up, only to land another right that put Lynn out for good.

Kakhramonov started off in dominant fashion as he knocked down Lynn in round one. Kakhramonov maintained top control for the remainder of the round.

He followed up with the second-round finish.

Kakhramonov becomes the new CFFC bantamweight champion as he improves to 8-2. Lynn falls to 8-5.

Nkuta knocked down the champions twice and earned at least one takedown in all four rounds to come away with a unanimous decision win.

Nkuta dropped Trujillo early with a right hand. Trujillo clinched with Nkuta, but the challenger scored a takedown on the champion. Trujillo got to his feet, but Nkuta returned him tot he mat with a second takedown.

Nkuta stuck to his wrestling in the second round, maintaining control for all five minutes.

Nkuta poured on the wrestling in round three. Trujillo clinched with Nkuta momentarily and landed a knee to the groin. Referee Bill Bookwalter called a brief stoppage in action. Nkuta wasted little time and went right back to his wrestling. Nkuta landed a spinning back elbow that put Trujillo to his butt to end the round.

Nkuta capped off the fight in round four with another dominant round. He took Trujillo down and cotnrolled his opponent to the bell.

Nkuta becomes the new CFFC flyweight champion as he stays unbeaten at 3-0. Trujillo drops to 5-2.

Official decision: Said Kakhramonov def. Tycen Lynn via knockout at 0:45 in round 2. He wins the vacant CFFC bantamweight title.

Official decision: Christian Rodriguez def. Charalampos Grigoriou via TKO at 2:41 in round 3.

Featherweight bout: Tom Pagiliarulo def. Shawn Stefanelli via TKO [Actions of the corner] at 3:39 in round 2.

Official decision: Tom Pagiliarulo def. Shawn Stefanelli via TKO at in round 2.