Added something to the bio that makes it way more badass. You’re welcome. – 🐍

Going to the profile, you see the announcement: 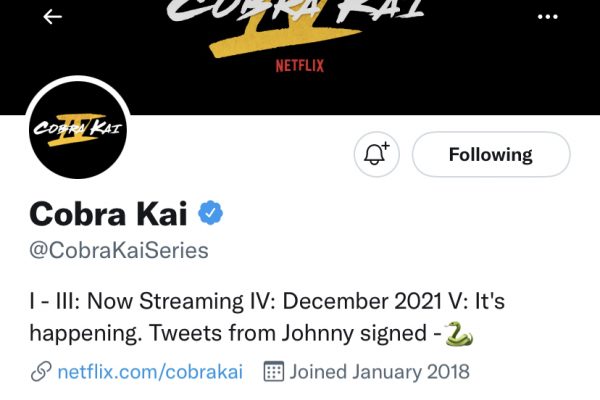 The dojo is about to be 5x as rad. Cobra Kai has been renewed for a 5th season. pic.twitter.com/8iz2M6Bzw5

Season four brings back Terry Silver and fans are eagerly waiting for the return of Johnny Lawrence, Daniel LaRusso, Miguel Diaz, and more. The series received rave reviews from the first two seasons before Netflix picked up the series for season three. Ending on a high point and with major cliffhangers, Cobra Kai was set for season four.

Apparently, the studio must be happy with how season four went when the fifth season was announced before the season debuts.

It is hard to predict what Cobra Kai’s new season will be about without having seen season four just yet. But with Martin Kove’s John Kreese coming into his third season, it’s hard to imagine that Terry Silver will be a one and done villain of the show.

According to the show runners, the Miyagi-verse consists of Karate Kid 1-3 and The Next Karate Kid, making all those characters canon and in the cards for Cobra Kai, newly announced season.

Season four of Cobra Kai comes out this December, however, and will assuredly shed light on where the series will go into it’s fifth season. When it comes out, it will be able to be binged on Netflix in it’s entirety.

The entire series has brought back characters from each movie. Season two brought back Kreese and season three took us back to Japan to see Chozen and Kumiko. We also know Terry Silver from The Karate Kid 3 is returning as mentioned above.

Stay posted to My MMA News for all the latest info surrounding Cobra Kai and more. Thanks for reading!