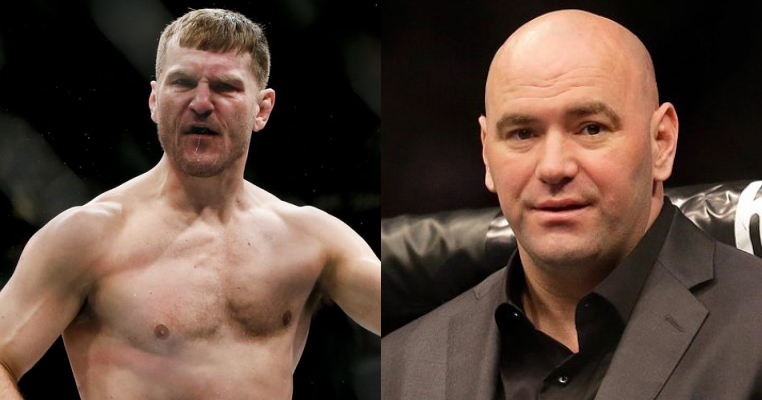 For former UFC heavyweight champion Stipe Miocic, UFC 226 will go down as one of the worst night’s of his professional fighting career.

Everything he had worked for this whole time in MMA was taken away from him in just seconds, more specifically the UFC world heavyweight championship.

All of that unfortunately came crumbling down on that fateful night of July 7th when Miocic lost the title to now current champion Daniel Cormier via first round TKO.

As if Miocic’s night couldn’t get any worse, shortly after the fight was over, Brock Lesnar stepped inside the octagon an picked a fight with Cormier, leading to the UFC making a likely bout between the two.

Once hearing this news, the former heavyweight champion was furious.

Feeling he deserved an immediate rematch after being the only champion in history to defend it three times straight.

Since then, Miocic has continuously lobbied for his rematch with DC, and criticizing Lesnar’s automatic shot at the belt at the same time.

UFC President has taken notice of this, and recently spoke out about it during an appearance on UFC Unfiltered.

White discussed Miocic’s demands for title shots recently, as well as the respect he has for the former champion despite his remarks.

“I don’t know why Stipe always feels like we’re disrespecting him, which we’re not,” White said (transcript via MMAWeekly). “We have a lot of respect for Stipe. I think he feels like it took him a very long time to get his title shot and he felt like it took longer than it should have. Every time I turn around, he feels disrespected. He’s anything but disrespected. Complete opposite. I don’t know.”

White also clarified, had Miocic defeated DC at UFC 226, it would’ve been him getting the money fight with Brock.

“Obviously you saw that we set up the fight with Cormier to fight Brock,” he said. “That would have been Stipe, if Stipe won the fight. It’s no disrespect to Stipe, it’s just something that was in place before that fight even happened.”

Do you believe Miocic is justifiably disrespected?

Does he deserve an automatic rematch with Cormier?