Ultimate Fighter season 14 winner Diego Brandao was released from the UFC on Thursday. 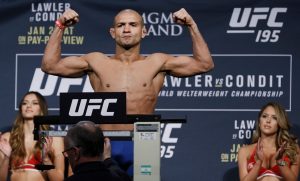 Brandao was also looking at a possible suspension for testing positive for marijuana following UFC 195.

The UFC has not officially released a statement on Brandao’s release.

Nick Diaz believes he should be facing Kamaru Usman, not rematching Robbie Lawler at UFC 266