Julio Arce will be defending his 145 lb Ring of Combat Championship at Louis Neglia’s ROC 58 in Atlantic City, NJ on February 24th. 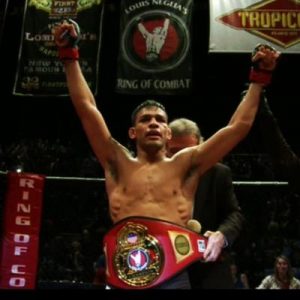 It will be a rematch against Frankie “Mantis” Buenafuente whom Arce defeated for the belt in November.

Arce is a proud product of Tiger Schulman MMA.  TSMMA has been making lots of noise and consistently helping their fighters reach some lofty heights.

Jimmie Rivera is one of the best 135 lb., fighters in the world and is in the mix for a shot at the UFC title.  He and Arce have been teammates for quite some time now.

“Hurricane” Shane Burgos now stands at 8-0 as a professional after a victory in his UFC debut in the lightweight division.

It would seem logical that Julio could join them on the biggest stage in MMA with another win over the former champ and dominant wrestler, Buenafuente.

In their first fight, Arce was incredible with his take-down defense, not allowing a single one. Clearly, he worked very hard and had a tremendous camp leading up to the fight. It’s one thing to practice take-down defense, but to come out and execute what he had been so diligently working was impressive and the key to his victory.

In Buenafuente’s previous fights, he showed dominant wrestling and continued to add to his over-all striking attack. Julio, a former Golden Gloves champion was able to make it purely a stand-up battle which he outscored his opponent on all of the judges scorecards.  It was even more impressive considering that Arce went up in weight from 135 lbs to take the fight against the red hot champion who was coming off  of 6 wins in a row.

After winning the belt, Arce told me “It was the best I’ve ever felt going into a fight. Not having to cut that extra 10 lbs made me feel strong. I hadn’t felt myself the last couple of fights after the weight cut.”

That added weight worked to has advantage as several times the defending champ was in on double legs and Arce was able to fend him off.

February 24th, Buenafuente, fighting out of Carnicella MMA, gets a chance to reclaim his championship and Arce will look to repeat his performance from several months ago.  It should be interesting to see if “Mantis” changes his game plan or comes into the cage and just tries to execute better.

These two fighters are loaded with talent and could both wind up in the big dance.  Before their first fight, Louis Neglia told me that he believed Frankie Buenafuente would be his next champion to sign that UFC contract, but Arce had different plans in mind.

I’m sure the instructor at Tiger Schulmann’s would like to get his chance to join fellow teammates in the biggest MMA promotion in the world. This will be the main event of the evening, with good reason.

We will be cageside with updates and a full recap.

By Mike Pendleton 31 mins ago