Khabib ‘The Eagle’ Nurmagomedov just announced his retirement from mixed martial arts this past Saturday following his dominant victory over Justin Gaethje at UFC 254. This has our hearts deeply saddened, both for ‘The Eagle’ and selfishly for ourselves. 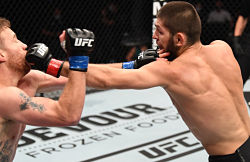 Nurmagomedov always looks dominant, but this was a completely different animal we were seeing on Saturday.

As expected, his fathers passing was a huge hit to him and the rest of the Nurmagomedov family. We’re lucky we got to see him fight again at all, but it was his fathers and his goal for him to make it to 30-0 by time he retired.

The way he looked over the weekend, he could certainly do that. He looked better than ever, he came out as determined as he ever has and it showed. The champion was walking right through Gaethje’s shots with no respect for his power, and it didn’t hinder him at all, it made him look all that more dominant and unstoppable. 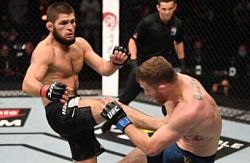 Gaethje was starting to really catch him with his leg kicks; he landed another hard one right before the finish. A few more of those and Nurmagomedov may not have been able to walk him down the way he was. It could’ve gotten pretty bad if that fight stayed on the feet much longer.

Nurmagomedov got a takedown toward the end of round one, with about 40 seconds left in the round, and he attempted an armbar that was nullified by the bell. The second round was more of the same.

When Nurmagomedov got the takedown, he jumped straight to mount and locked in the triangle choke, rolled to his back, and finished the fight at 1:34 of round two.

He did the same exact thing to Abel Trujillo when they fought, but the bell at the end of round one saved Trujillo and it ended up going the distance in a fight Nurmagomedov broke the record for most takedowns in.

As far as him announcing his retirement, he said he can’t do this without his father.

His father had been with him the whole way, all throughout his life. Not only was he (Abdulmanap) Khabib’s father, but he was his coach and his best friend. Khabib still lived with him and his mother with his wife and kids, and he still does now, just without his father. 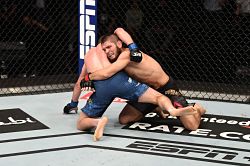 He doesn’t want to continue on this journey alone, and we can’t really blame him. Death is one of the most depressing things about life, but it’s the only thing that’s guaranteed as soon as we’re born.

The question is though, if their plan was to make it to 30-0, why not stick around for one more?

All the reasons are mentioned above of course, but most agree it’s very unfortunate when someone retires leaving us all wanting more. The truth is, even if he did fight once more, we’d still want him to stay around after that. 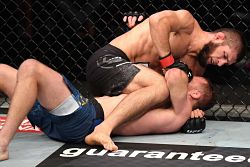 When athletes retire on top, like ‘The Eagle’ just did, like Henry Cejudo did earlier this year, like Georges St-Pierre did in 2013 and 2017, we’re all left a bit unsatisfied.

At least ‘GSP’ had a long run at welterweight. Cejudo is very unfortunate because he only defended the flyweight and bantamweight belts each once.

Nurmagomedov never lost a single fight, he only ever lost one round, round three to Conor McGregor, and that was honestly debatable. Nurmagomedov ties BJ Penn and Benson Henderson for the most lightweight title defenses in UFC history, and he definitely has the skill to break that record. 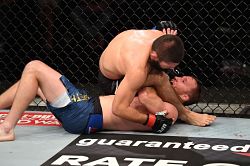 He mentioned how Conor McGregor and Dustin Poirier may be fighting in January, but mentioned how he finished both of them handily, and he did, but what if that’s not the No. 1 contender fight?

The UFC is trying to put on Tony Ferguson versus Michael Chandler in December, the winner of that fight makes perfect sense.

Chandler’s a three-time Bellator Lightweight Champion and has a total of three title defenses, and Ferguson’s the only interim lightweight champion Nurmagomedov hasn’t fought. 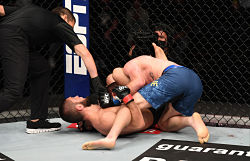 Ferguson was tied with Nurmagomedov for the longest win streak in lightweight history until he lost to Gaethje in May, and he still poses some threats to ‘The Eagle’.

He did say he wants to be ranked as the No. 1 pound-for-pound fighter in the world, but he can’t be if he’s retired.

Both Ferguson and Chandler are new faces, and for anyone to have a win over either of them is quite impressive, they’re two of the very best fighters in the world. It’s not some massive superfight, but it’d still be an epic lightweight title fight everyone would be excited to see. 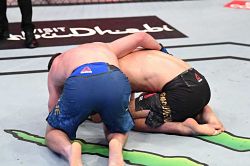 ‘GSP’ was another option that Nurmagomedov fancied, but it appears he no longer wants that fight either. It’s not just about 30-0, it’s also about having the most title defenses in UFC lightweight history, he’s so close to breaking it.

Retiring at 29-0, Nurmagomedov definitely made his mark, there’s no question he’s the best 155 lb fighter to ever live, it just stings when you’re left wondering.

We never got to see the Ferguson fight, they were both healthy this year when it was scheduled for the fifth time, but it didn’t work out. Ya know, Covid. They even both made the walk at UFC 229, just against different opponents. Maybe it just wasn’t meant to be.

Hopefully the UFC can get him to hold onto his belt and come back for one more, but if not, thank you Khabib Nurmagomedov for your wonderful, flawless career. We all appreciate your performances and the way you carry yourself outside of the octagon, you are a true GOAT.