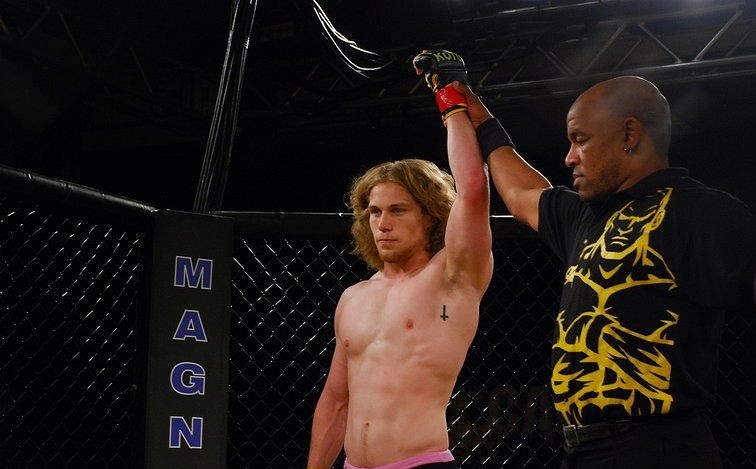 Coming off a big win at King of the Cage: Under Seige just last month Kurt Kinser is one of the top featherweight prospects in mixed martial arts today.

Tony Reid – You started your career at 8-0 with seven finishes. The fights I have watched of you it’s almost if as soon as you get your hands on your opponent it’s over for them. Game. Set. Match.

Kurt Kinser – “I think I have a straightforward, grinding style. I like to always be moving forward. I like to always set the pace. In wrestling I was always a grinder. I always looked for the finish. I think my style has always complimented that thought well. I try to throw what I have and overwhelm guys without putting too much into each shot and gassing myself out. I like to throw everything I have at my opponent at once and make it hard for them to get into their game plan and get into a groove. I have wrestled since I was a young kid. I grappled a lot. I have always been a big fan of catch wrestling. I have boxed since high school. I have a pretty well rounded game.”

Tony Reid – Your nickname is “The Prophet of Pain”. How did that style and that name come to be?

Kurt Kinser – “I was a religious studies major in college. I always thought that I would go into a religious career. My grandmother doesn’t like the name too much. It does have a ring to it, though. I think it honestly does say something about me and that means more than anything.”

Tony Reid – You have a decorated background in wrestling and that style doesn’t always translate well into a finishing style in mixed martial arts. You have such a high finishing rate but we don’t always see that translation. Why are you different in that sense?

Kurt Kinser – “Even within styles, such as wrestling, everybody really has their own style. From a young age my particular style of wrestling translated very well into fighting. I wouldn’t go as far as to say I purposely wrestled that way but my style always felt right to me. My style even in wrestling has been of a stand up, trying to go toe to toe with the guy for better or worse. Luckily, that style of wrestling did transfer over quite well to MMA for me. Even in grappling my style has allowed me to finish a high rate of opponents.”

Tony Reid – Speaking of styles, we have to talk about the hair style. You had the Ben Askren/Urijah Faber-esque look then it was more high and tight. What’s with the change in hair styles?

Kurt Kinser – “I have always had long hair. That’s what I was used to and what I liked for a long time. To be honest it started getting even longer and bigger that it used to be. I am a conservation officer now and I balance that job with training and fighting full time. It’s just one of those things. The first day of boot camp they take the guard off the razor and get rid of everything you have up there. I saw that coming and decided to cut my hair first. I keep it high and tight. It’s much easier to deal with and it’s much cooler in the summer so it’s hard to complain in that sense.”

Tony Reid – You come from a family rich in tradition of sprint car racers. What made it an option or thought to break away from that family tradition and pursue a career in mixed martial arts?

Kurt Kinser – “My dad was a state champion wrestler. My brother was a wrestler as well, so I come from a wrestling family, too. Obviously it’s not as big as racing in my family. I have been around racing my whole life. From a young age when I started wrestling I always enjoyed it so much. I enjoyed the family business, too I loved the racing. But as far as I can remember when I first started watching wrestling and fighting and the first time I saw MMA the early UFCs the early Prides, I have always enjoyed it. It’s hard to pinpoint a specific moment but I remember the first time I saw combat sports. There is nothing like it. When I first saw guys like Sakuraba and Cro Cop in Pride, that’s when I knew that’s what I wanted to and that’s who I wanted to be.”

Tony Reid – I hear that your mom is the nastiest, toughest driver in the entire family. Can you confirm or deny that?

Kurt Kinser – “Oh yeah. She does a lot of the long hauls for the family. She can get going pretty fast on the open road.”

Tony Reid – Earlier you mentioned Sakuraba by name as a fighter who influenced you. What was it about him that drew you to him? Was it the catch wrestling background, the showmanship or a combination of everything?

Kurt Kinser – “I think it was a combination of everything. His pro wrestling and catch wrestling style always played into my interests. His showmanship was great. When I was really young Pride was really big. I watched the old gritty UFC events and then you see the production value of Pride that drew me in. The personalities of Sakuraba and the other fighters drew me to it. The first time I saw Pride it was just like ‘Wow!'”

Tony Reid – Who from the early UFC days captured your interest most?

Kurt Kinser – “Coming from a wrestling background it would have to be guys like Dan Severn. Big wrestlers like him and Mark Coleman. I was always a big fan of the sport and liked a bunch of different guys though.”

Tony Reid – If you could choose one fight from your career that every MMA fan should see, which fight would you choose and why?

Kurt Kinser – “One that I can honestly say stands out would be my King of the Cage fight against Daniel Head. Many different things stand out about that fight. It’s one of those fights were I implemented my game plan a lot. My opponent was durable. He got hit with a lot in that fight. He is one of those guys that would just power through stuff. He and I were in a war. I don’t even remember but I was told that there was a point where he threw a front kick in the second round and I ate it more than I blocked it and powered through. There were a few moments where I would grind through. There were moments where he attempted some big things but I was able to stop the onslaught. As far as an early fight that was one where I showed my heart and my skills.”