Kyle Estrada meets Adrian Yanez in the main event LFA 78, the promotion’s debut on UFC Fight Pass, and he can’t wait to take advantage of the chance he’s been given.

Third time fighting for LFA, first time in the main event, what do you think about this opportunity?

“I mean it’s awesome. It’s funny cause like I’ve been part of Black House MMA since 2010, and then I went pro in 2015. And I was always wondering why, actually I would always complain to my head coach, how come LFA never wants to put me on?… But I believe everything happens for a reason. When I got my opportunity, I finished that one fight with leg kicks. Everything just happens for a reason you know? Like I got the opportunity and I seized the moment, so I’m going to do that again.”

How do you go out there capitalize on the situation and make a statement?

“I’ve just got to go out there, have fun, and do what I do; I don’t worry too much about my opponents. I know he’s good. I wouldn’t be fighting him if he wasn’t. He looks fun too. I’ve watched some of his fights, not too many, not his recent fights, but the ones I could find on YouTube. He looks like a very fun person to fight with, he looks scrappy. He’s good, he’s 9-3, I think; and they’re putting me in the main event with him. He’s been with the promotion forever. He’s from Texas. I know before LFA was LFA there was the other company, I think it was Legacy. Legacy was a Texas based company. So, he started from them as an amateur with them. But, I’m excited. I’m very, very, excited to fight with him, compete with him. I don’t like to say fight with.”

“I see it more as like art. People can judge me all they want. It is a fight at the end of the day, but if I see it as an artform, I end up doing better myself. If I see it as I fight, I go back to old days when I use to street fight and turn it into a brawl, and I can’t fight like that.” 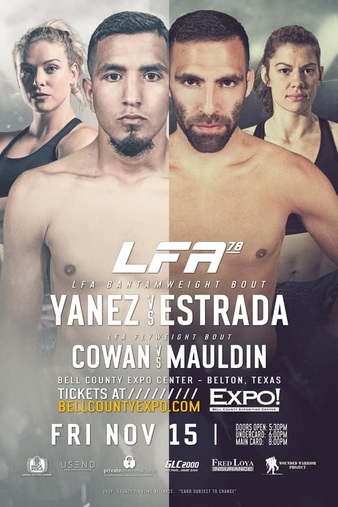