Lenny “The Gorilla” Rufati has gotten off to a 2-0 record as a professional mixed martial artist. That doesn’t mean that his Roufusport MMA Academy coaches and trainers are telling him how great he is.  They are some of the best in the business and are very hard on him when they review each and every fight. Lenny believes that this will only make him better.

Rufati travels back to his roots in Atlantic City from Milwaukee to look for his third straight win on May 31st at Louis Neglia’s and Dead Serious Promotions Ring of Combat 68.  As an added bonus, ROC has now become the latest addition to the UFC Fight Pass and will be streaming live across the globe.  Lenny matches up against Troy Green who is 1-0 as a pro and was 4-0 as an amateur.

Please check out our interview with Lenny Rufati in the link above. We chat about his teammate Anthony Pettis, who has just signed on to fight Nate Diaz, and how his camp is progressing.  Rufati is a very hard worker and appreciates the opportunities he has been given.  That hard work has earned him a loyal, genuine supporting cast who help him tremendously with meals and sponsorship.  He intends to pay them back with his effort and performance inside the cage.

MyMMANews will be at the Tropicana Casino and Hotel Resort bringing you live updates and results.  Ring of Combat 68 will be broadcast live on UFC Fight Pass. 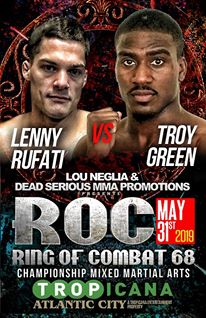 By Ryan Sprague 3 hours ago