USADA announced today that UFC® athlete, Lyoto Machida, of Salvador, Brazil, has accepted an 18-month sanction for an anti-doping policy violation after declaring the use of a prohibited substance and subsequently testing positive for the use of that substance. 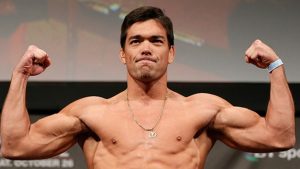 During an out-of-competition test conducted on April 8, 2016, Machida, 38, declared the use of a product containing 7‐keto-dehydroepiandrosterone (7‐keto‐DHEA) on his sample collection paperwork. 7‐keto‐DHEA is a prohibited substance in the class of Anabolic Agents and prohibited at all times under the UFC Anti-Doping Policy, which has adopted the WADA Prohibited List. Upon notice from USADA of his potential violation, Machida immediately confirmed his use of the product, which listed 7-keto-DHEA as an ingredient, and fully cooperated with the subsequent investigation after advising USADA that he did not realize 7-keto-DHEA was a prohibited substance when he used the product.

Machida’s sample was analyzed at a World Anti-Doping Agency (WADA)-accredited laboratory and reported to USADA for an elevated 7β-hydroxy-DHEA to DHEA ratio, which is consistent with his declared use of a prohibited substance.

Under the UFC Anti-Doping Policy, as well as the World Anti-Doping Code, an athlete’s period of ineligibility for using a prohibited substance may be decreased depending on the athlete’s level of fault for the anti-doping policy violation. The UFC Anti-Doping Policy further provides that the prompt admission of an anti-doping policy violation may also be considered a mitigating factor in determining an appropriate sanction. Here, based on the circumstances of Machida’s violation, USADA determined that a reduction to 18-months from the standard two-year period of ineligibility was justified.

Machida’s 18-month period of ineligibility began on April 8, 2016, the date his positive sample was collected and he declared his use of a prohibited substance.

By Doug Murray 19 hours ago