Macy Chiasson was an athlete all throughout high school, playing softball, golf and any other sport that her school would offer. The athletic ability has helped her excel as a martial artist. She is undefeated as a professional fighter and will make her Invicta FC debut on May 4. For most, this would mean that everything has been going according to plan, except none of this was part of Chiasson’s plan. 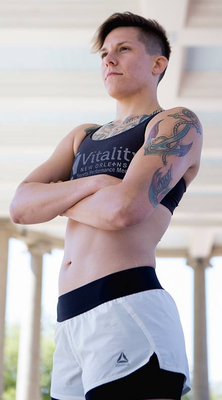 Chiasson never stepped foot into a martial arts school until she was 19. She recovered from a car accident which had her bed-ridden for three and a half weeks. Then she walked into the gym nearby to try a class and that’s when her martial arts journey began.

“So I was looking to get back into something fitness wise, so I was like let me check out this gym that’s down the street,” said Chiasson.

“So I went and walked in there and I’m like these people were like fighting. Like they’re doing knife fighting and handguns and hitting each other with sticks and shit and I was like alright this looks cool. I took my first class and I went back ever since. I went back the next day, the next day and the next day, I was hooked. The aggressiveness, the mentality behind all of it, I was just hooked from the start.”

The gym she walked into was a Krav Maga gym. Krav Maga was developed by the Israeli Defense Force (commonly known as the IDF) for self defense purposes. It involves some of the nastiest techniques such as eye rakes, groin strikes in addition to teaching defense against weapons. Chiasson began teaching at the gym about a year after training. After training more and more often, Chiasson began yearning to fight, but Krav Maga wasn’t a martial art that translated to competition. She started watching Invicta FC fights and knew that MMA was what she had to do to find the competition she craved. She originally started at Mushin MMA, she fought her first two amateur MMA fights under their banner before switching to Mid City MMA because of Thanh Le.

“He was there and I was like I really want to train with the best of the best here in New Orleans and that was Mid City.”

Fighting was just a hobby for her right up until she was about to graduate from college.

Now she is all in.

But it doesn’t come without sacrifices, she is training full time and to support herself she is teaching Krav Maga at her old gym and is a personal trainer. Often putting in hours all through the day.

“I would make things do and I would train people at four am, said Chiasson. “I’m training people at four am in the morning and after training at ten o’clock at night so I’m pretty much going all day to make ends meet.”

Now those sacrifices are starting to pay off as she has signed with Invicta FC for a fight on May 4. Invicta is the promotion that helped inspire her to start fighting in the first place. For Chiasson, it’s not only a surreal experience to be a part of their roster but it caused a whole lot of different emotions when she put pen to paper to sign the contract.

“I was really excited as anyone really should be. I think I was more humbled like wow, at this point in my life I made it here. I used to watch all these girls on TV fight and I never imagined years later that I would ever, ever be on a big card like that or a big promotion like that. It was a truly humbling experience for me. And more of a motivation for myself as well cause I never thought in a million years I would be that far. And also I wanted to give myself a pat on the back because you deserve this.”

Now that she has a fight, she can focus on her opponent, but the road to get an opponent was difficult. There are not many female featherweights to fight, so it took a while to find an opponent, much longer than she wanted it to take.

“Since my pro debut in October we have been trying non-stop for about five months now until we got the contract with Invicta. It’s been hard.”

“It’s been really tough as a featherweight to get fights.”

She had previously tried to get onto three local cards in New Orleans but was unsuccessful and has stayed in shape just in case something came through. Chiasson’s goal was to have several fights before signing with a top promotion like Invicta but she couldn’t turn down the opportunity.

“I really wanted to have several fights before I made the move to Invicta but I mean you gotta take chances, I’m not gonna be 26 forever. It doesn’t matter, at this point we’re ready to move forward, we’re ready to fight.”

144 Likes, 2 Comments – Macy Chiasson (@mma_nola) on Instagram: “Keep up and keep pushing. Doesn’t matter if I’m behind or in front , my team is always influencing…”

Move forward she did, Chiasson signed a four-fight contract with Invicta and her first fight will take place at Invicta FC 29 on May 4 against Allison Schmidt who is also 1-0 as a professional. Chiasson said after watching tape believes likes to wrestle based off of Schmidt’s tape. She see’s Schmidt attempt a lot of single legs but believes she is up to the challenge.

“I’m looking forward to the challenge, the wrestling challenge and if she wants to stand up I’m even looking more forward to that.”

And more importantly she wants the finish.

“I really do believe that I’m going to have a finish, either in the first or second round.”

But she doesn’t know if it will be a knockout or a submission.

“Every time I always think I’m getting a knockout I end up with a submission, I don’t know what to think anymore,” said Chiasson while laughing.

If victorious, there is a name on the Invicta roster that Chiasson would like to fight, and the name of that person is Felicia Spencer. Now, there is no hate or ill will in this, in fact Chiasson said they have an enjoyable relationship and thinks she’s a super awesome person. However, Spencer did beat Chiasson in her second professional fight back in 2014. Chiasson was then offered a fight with Spencer two weeks’ notice and it was right after her pro debut, Spencer was 3-0 at the time and Chiasson wasn’t going to be prepared. In fact, the circumstances were similar in their amateur fight, the fight was on three weeks’ notice after she had her amateur debut. At the time Spencer was a brown belt in jiu jitsu and Chiasson said she wasn’t doing much of the art at the time. It was a point of pride for Chiasson that though she lost, it wasn’t by submission.

“I want to say, I’m very proud of myself, going three rounds and not getting submitted. She did take me down a few times, but it went three whole rounds and every single time I got back up she took me down. So I’m really excited, if we ever get a rematch, to kinda see how everything plays out from there.”

Another possibility that intrigues Chiasson is participating in the upcoming season of The Ultimate Fighter. The UFC just announced that women featherweights will participate in the 28th season of the Ultimate Fighter. However, they must have three professional fights before the tryouts on May 22. Unfortunately, Chiasson doesn’t believe she will be able to get a third fight in time for tryouts.

But before she can get ahead of herself, Chiasson is focused on her upcoming fight, a fight she can’t wait for. 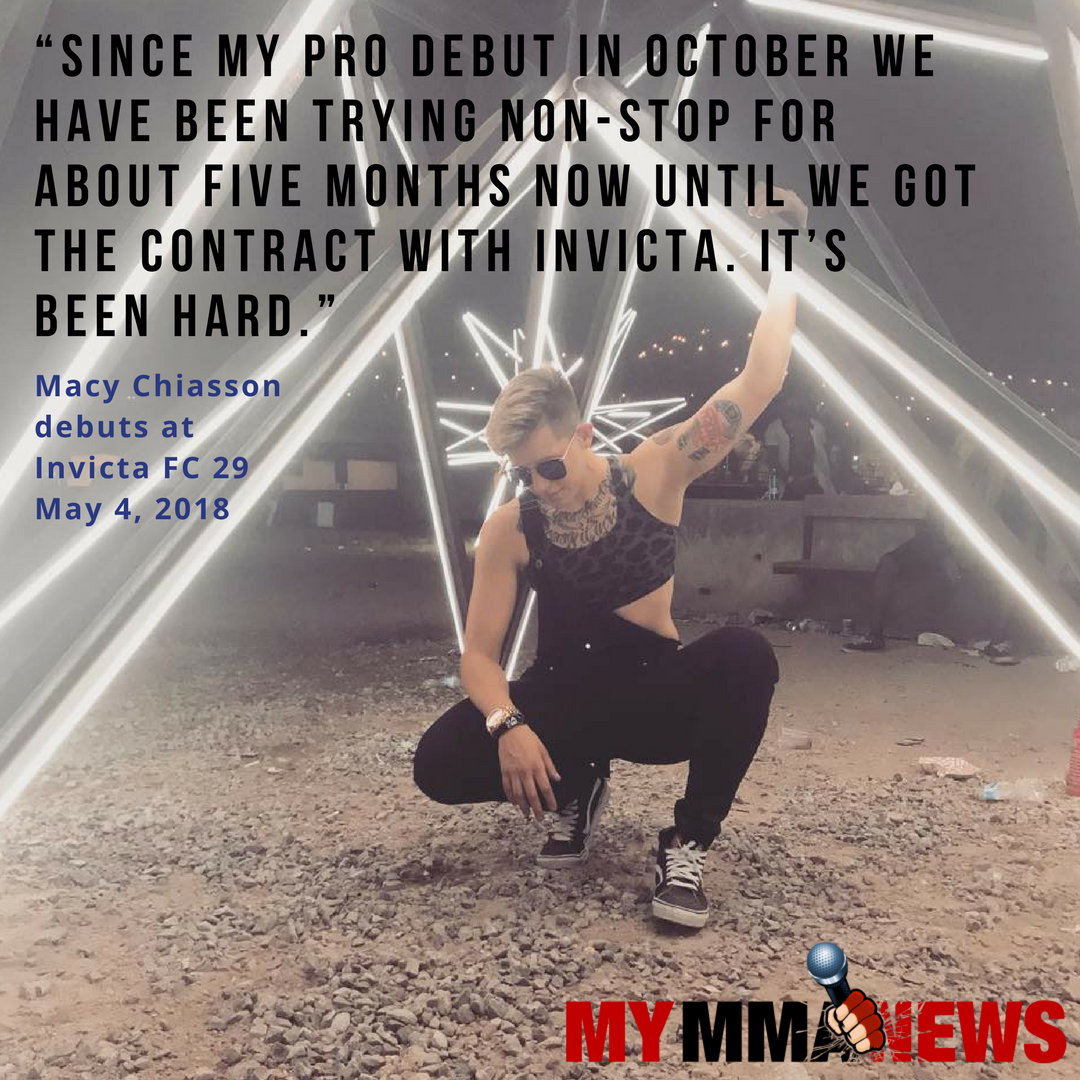