A pair of female strawweights will touch gloves at the center of the octagon May 12 in Rio de Janeiro, Brazil when Amanda Bobby Cooper and Mackenzie Dern meet at UFC 224.

Dern will be competing in her third fight in five months.  After a victory over Kaline Medeiros at Invicta FC 26 in December 2017, Dern was signed to the UFC where she made her debut against Ashley Yoder in March. The winner of six straight professional bouts, the undefeated jiu-jitsu ace looks to go 2-0 inside the octagon.

Cooper (3-3) is coming off a December knockout win over Angela Magana at UFC 218. ABC has been with the organization since starring on season 23 of the Ultimate Fighter. Cooper lost to Tatiana Suarez in the finale but then came back to take two of her next three bouts.

Some of the top sports betting sites are predicting Dern to win and for good reason. The 25-year old BJJ ace is a former world number one ranked IBJJF competitor, currently ranked sixh among the female divisions. She is an ADCC and no gi BJJ (black belt) World Champion, and she is the daughter of Wellington “Megaton” Dias, one of the most highly decorated grappling competitors ever.

But for Dern to have the best opportunity for submission, she has to get the fight to the ground.  Not an easy task when you are dealing with Cooper who is known for having great hands.  According to statistics released in the graphic below from the UFC’s website, Cooper owns a higher takedown accuracy than Dern.  Cooper’s 42.86 % might be enough to get Dern down once to earn the points on the judges’ scorecards.  If she can work herself back to her feet before she Dern attempts to lock up a submission, she could steal a round or two, or even the fight.  Keep peppering the jiu-jitsu black belt to keep her distance and get her down to the canvas while avoiding being submitted should be the blue print that Cooper and her camp are looking to follow. 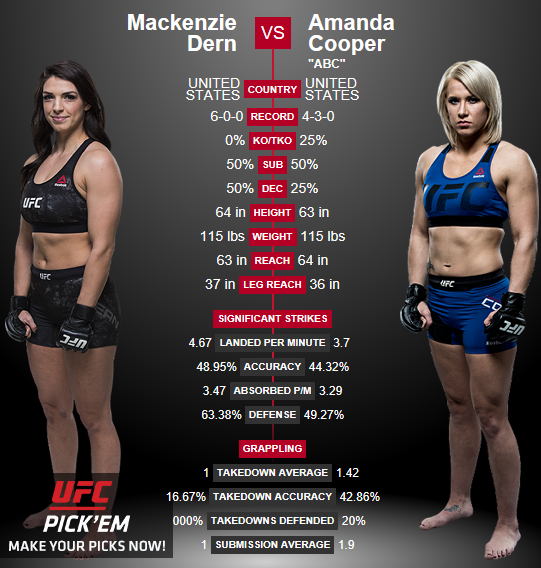 Understanding how UFC betting odds work is really not as complicated as it may seem at first. When you bet on UFC you are basically looking at money lines that will favor one of two fighters who are going to face each other. One of the fighters may be at for example -240 while the other one at for instance +200. What this actually means in plain English is that you would be risking $240 to win $100 if you bet on the favorite. The favorite would be the one with the minus sign, while the one with the plus sign would be the underdog.