Enrique Barzola has been making some serious waves in the Bellator bantamweight division since departing from the UFC in 2021.

Making his promotional debut earlier this year in January, he shocked the MMA community by stopping (TKO) former Bellator bantamweight champion Darrion Caldwell in round three of their back-and-forth affair. This was the first time he’d fought in nearly two years, 21 months to be exact.

This was followed up by another victory just two weeks ago, where he defeated Nikita Mikhailov via unanimous decision at Bellator 278, improving his record to 18-5-2.

Now he already has his next bout lined up, as he’s scheduled to face Magomed Magomedov in the quarterfinals of the Bellator bantamweight gran-prix. 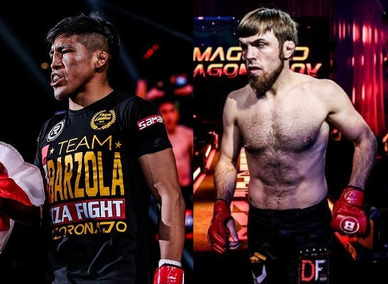 The Peruvian talent is certainly making up for missed time; this will be his third fight before the halfway point of 2022 is up.

Barzola once held the record for most takedowns in UFC featherweight history, and he only fought in the division eight times. To this day, the only two men with more takedowns in divisional history than himself are Dennis Bermudez and Darren Elkins.

Magomed Magomedov on the other hand is no stranger to wrestling himself, he’s truly great at it, though he’s coming off a defeat to now interim Bellator bantamweight champion Raufeon Stots, a fight he was out-wrestled in.

His only other defeat comes to former UFC bantamweight champion Petr Yan, someone he also boasts a win over.

Coming into this fight with a record of 18-2, Magomedov is certainly looking to get back on the winning track and re-enter himself into the Bellator bantamweight gran-prix, while Barzola looks to make it three-straight since joining the promotion.

Who walks away from this bantamweight encounter at Bellator 282 the victor?

By Brian Jensen 17 mins ago