Mario Bautista (9-2), beat Jay Perrin via unanimous decision at UFC Vegas 48, Bautista was looking to get back into the win column after falling short to Trevin Jones at UFC 259.

Bautista and Perrin fought a very high paced fifteen minutes, Bautista reflected on his performance and believes it was a valuable experience: 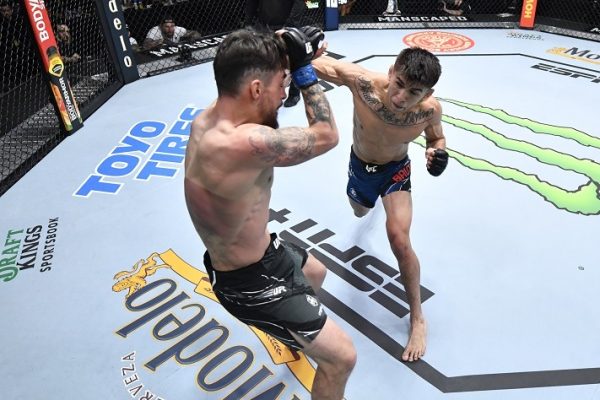 Bautista did his best work inside the clinch where he would take advantage of the elbows and knees, heading into the fight Bautista highlighted the clinch as a potential way to gain victory:

“I was prepared for anything, and we went through so many different scenarios in this fight, but as the fight went on, I realized he wasn’t circling out and he was letting me press him against the cage, He allowed me to do damage in the clinch.”

Jay Perrin took the fight on short notice; Bautista was uncertain he would fight after his original opponent pulled out:

“I put it into my head to expect something to happen, with everything that’s going on with the world right now. Luckily my manager, Jason House, he’s really good at getting us fights on short notice. He got me into the UFC on short notice. I trusted him; it came down to the wire at the end but luckily he got it done.”

As previously stated, Bautista was heading into the Perrin fight of the back of a loss against Trevin Jones, Bautista felt more hunger and urgency to get back into the win column.

“Coming of a loss and having all that time off, that was a big thing, and I wanted that win, I came in and shown it. To get the win with my coaches in my corner. I always tend to do good coming off a loss, went I got on the new contract and took the fight with Trevin Jones and it didn’t go my way, so maybe I fight better with pressure.”

After the fight Bautista highlighted Ronnie Lawrence as a potential opponent the next time he steps into the octagon.

“I like the way he fights with his heart and the way he grinds. I love them type of fights when I get pushed as far as I can, to test my will against someone like his it will be a big experience for me to fight someone like Ronnie.”

Watch the full interview with the LINK above.