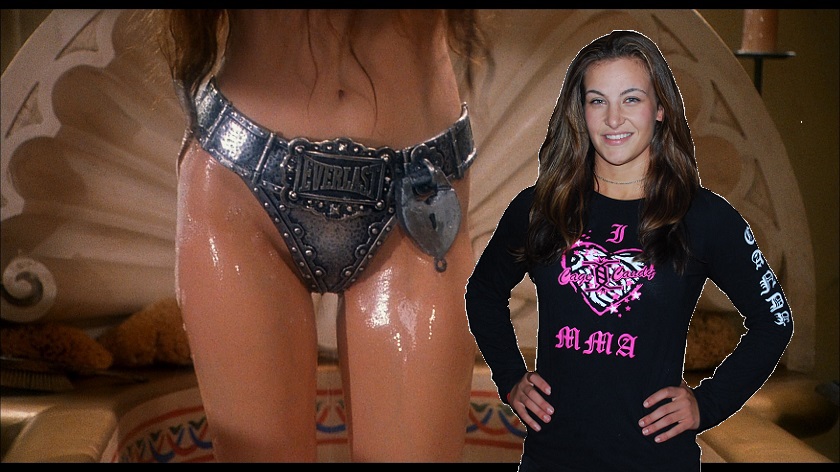 Miesha Tate – “That girl has an iron vagina”

UFC women’s bantamweight standout, Miesha Tate, was in New York earlier this week helping promote the new EA Sports UFC game when a TMZ reporter with virtually nothing better to ask the fighter questioned her about getting hit in the breasts.

“No, actually,” Tate replied. “That’s one of the weird questions I get asked a lot.”

Then he asked whether it hurts to get hit in the groin like it does for a guy?

“I don’t think like a guy, no, but it hurts,” said Tate. “I don’t know, I’m not a guy, but guys say it almost makes their stomach cramp.”

Then the unprofessional reporter got really immature and asked if there was ever a fight where a woman kicked another woman in the groin and it got stuck.

“Not exactly, but you know I was training with Cindy Dandois, a fighter from Belgium,” said Tate. “I went to push kick her, and she came forward at the same time, and I snap kicked her right in the vagina. I swear, I almost broke my foot. That girl has an iron vagina. It was horrible. I was the one who dropped.”

Continuing with the childish questions he then asked Tate if she does Kegel exercises. Again, Tate played the game and answered gracefully.

“No,” replied Tate. “There’s no kind of vagina exercises.”