Mike Jackson won a unanimous decision over Phil Brooks at UFC 225 putting his record officially at 1-1, and Brooks who many know as “CM Punk” at 0-2. While the result was expected, the manner in which it happened did not earn Jackson many new fans. Instead, it got more fans acknowledging Brooks’ passion for competition and going all three rounds as best as he could.

That is not to say Jackson did not do the same, but his performance showed otherwise when he was winning rounds against Brooks in what some would call disrespectful at some points. Say what you will about the method in which Brooks made his way into the UFC and any special treatment due to his celebrity status, but he took both fights he lost seriously and trained hard enough to be ready for them. Jackson did too, made weight and won fair and square but it was not without ire.

There was a point in the fight where Jackson was in Brooks’ guard and he was striking in what seemed halfhearted strikes as if to say, “ I can hit wherever I want” and circling his fist around in what Dana White called “bolo punches” when he gave his assessment of the fight at the post-fight press conference.

“Mike Jackson I’m not happy with,” White said when asked about the fight. “He [Jackson] never looked like he was trying to finish, it looked like he could have a few times but never tried. I don’t know what the guy did for a living before we gave him the shot but he needs to go back and do that again.” Jackson responded on social media to White’s comments and said he was not doing any of the things White said, that he was looking to his corner for instruction and being cautious but that is hard to believe when noticing the punches White referred to.

Mickey Gall showed Brooks more respect by taking the fight to him as Brooks tried to do the same and finished him quickly to prove a point in their fight back in 2016 when Gall submitted Brooks quickly in the first round at UFC 203. Brooks did the best he could with the experience he had, if Jackson was looking to do re-iterate the same message Gall sent he would have given Brooks the honor of the finish.

However, Brooks said it best himself “You wins some, you lose some!” 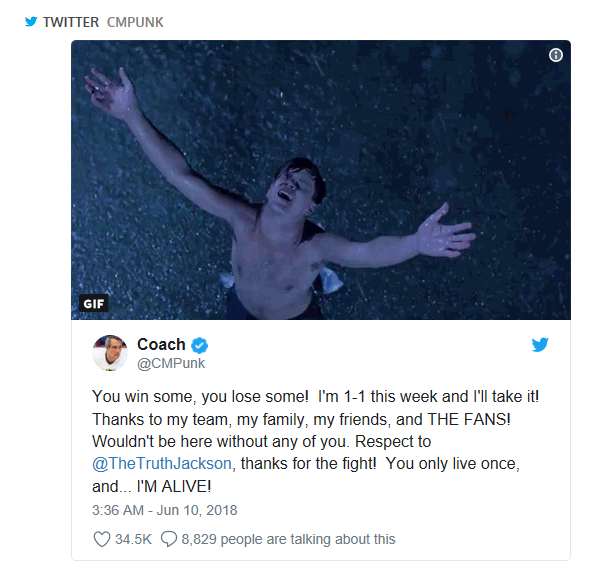 He may have lost the fight but he won some respect in MMA.