We have a great early preliminary main event coming this weekend at UFC 254, as former champions Nathaniel Wood and Casey Kenney battle one another on ESPN+.

This fight will proceed at a catchweight of 140 lbs, though they’re both natural bantamweights. That will most likely aid Wood more so than Kenney, considering Kenney has only had a handful of bantamweight fights in his career.

Coming to the UFC with an 11-1-1 record, just two of those fights were contested at bantamweight, with two being 130 lb catchweights, and seven being held at flyweight. 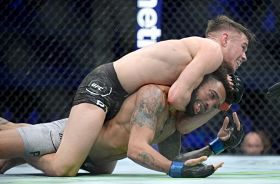 Wood came to the UFC with a 13-3 record and fought all 16 fights of those bouts at 135 lbs. Both of these talents are 4-1 in the UFC, though Wood joined the UFC about nine months prior to Kenney.

That one submission (guillotine choke) was over Louis Smolka, who he finished at 3:03 of round one, a very tough opponent to defeat, let alone finish. 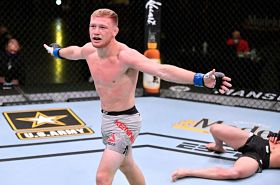 Kenney’s lone defeat in the UFC comes to Merab Dvalishvili via unanimous decision, while Wood’s lone promotional loss comes via TKO early in round three against John Dodson.

One thing that makes this match up very exciting is the clash of styles. They’re both great grapplers with great striking. At the time of Wood’s UFC debut, nine of his 13 victories came via knockout, and just two via submission.

It was surprising to see him secure three-straight submissions once crossing over, and his last fight showcased his striking, which was very sound and in-tune, where he picked up the unanimous decision (30-27, 30-27, 30-27) victory over John Castaneda.

Kenney didn’t have the easiest welcome to the UFC, as he was first matched up with former UFC flyweight title challenger Ray Borg in his promotional debut. To our surprise, he actually out-grappled Borg to a unanimous decision (29-28, 29-28, 30-27) victory. 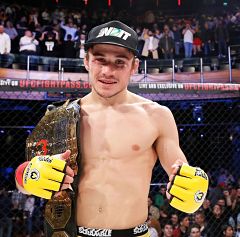 Wood wasn’t given an easy road either, as he was first matched up with UFC veteran Johnny Eduardo, and then Andre Ewell. They’ve both shown us they can hang with, and defeat high level fighters. 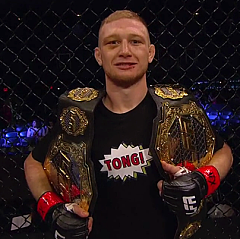 This will most likely be a very close, competitive, back-and-forth fight between these two. As mentioned above, they have similar styles, and they’re at a similar experience level as well.

Kenney seemingly has a little more extensive of a martial arts background though. He started training Judo at the age of five, and he boasts a 2nd-degree black belt in the art, as well as being a nine-time national champion in the art. Kenney also has a BJJ purple belt, which certainly aids him in his dangerous grappling.

Kenney also competed in wrestling in high school, and excelled in that as well, having won multiple state championships in both Freestyle and Greco-Roman. He then decided to try out mixed martial arts as an amateur, and like Wood, had a successful amateur career before turning professional.

Wood, 27, stands 5’6” and boasts a 69” reach, while Kenney, 29, stands 5’7” and boasts a 67” reach. It’ll be interesting to see who continues climbing that bantamweight ladder here, whoever does should expect a number next to their name very soon.

Who do you see winning this bantamweight battle of former champions?