UFC light-heavyweight prospect Jimmy ‘The Brute’ Crute just picked up another jaw-dropping stoppage this past Saturday at UFC Fight Island 6, as he KO’d Modestas Bukauskas at just 2:01 of round one.

This marks Crute’s second first-round stoppage in a row, and it also marks his second Performance of the Night bonus in a row. This 24-year-old prodigy has all the potential in the world to become the best 205 lb fighter on the planet. 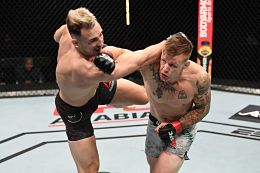 In his UFC debut, ‘The Brute’ was given quite a tough task, a fight with former BAMMA Light-Heavyweight Champion Paul Craig. After a very competitive back-and-forth battle, Crute ended up doing the impossible.

Craig is well known for his wicked BJJ, especially off his back, but overall in general. At this point, Craig has 13 wins and 12 come via submission. Crute was able to get on top toward the end of round three and get the tap with a kimura at 4:51 of the round. 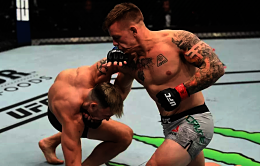 Crute is a very established grappler himself, he’s a BJJ black belt at just 24, which is quite astounding, but man was that something to see! Crute then fought The Ultimate Fighter 16 veteran Sam Alvey, who he TKO’d at 2:49 of round one.

Alvey isn’t the most technical opponent out there, but he is incredibly heavy handed and is a dangerous opponent for most. Crute was then submitted (Peruvian Necktie) by BJJ black belt Misha Cirkunov, bringing his record to 10-1.

Though this was a shocker to most, especially since Crute had just submitted Paul Craig nine months prior, Cirkunov is a very elite grappler, and the then 23-year-old Crute didn’t have an answer for the rare submission he was locked in.

That brings us to his two Performance of the Nights, where he rag dolled Michal Oleksiejczuk for about three straight minutes, securing eight takedowns in that time, before getting the submission (kimura) victory at 3:29 of round one. 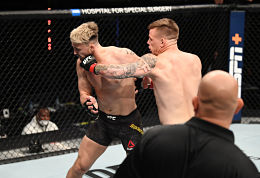 Oleksiejczuk is an incredibly skilled talent that makes a dangerous opponent for anyone, and Crute just ran right through him.

The same goes for last Saturday when he fought Modestas Bukauskas, where Bukauskas went for a high kick and was stopped right in his tracks with a perfectly timed right cross from Crute.

After dropping Bukauskas, Crute followed it up with a right uppercut and a left cross, and that was all it took, he was awarded the KO victory at 2:01 of round one.

After looking unstoppable in his last two fights, what’s next for Jimmy Crute? To our surprise, he isn’t ranked, even though someone he has a win over, Paul Craig, sits at No. 14.

Craig is rematching the No. 13 ranked Shogun Rua at UFC 255, so both of them are out. The No. 15 ranked Ovince Saint Preux is available, and is coming off a second-round KO victory over Alonzo Menifield, that’d be a great fight. They’re both very well rounded, and they’re both very dangerous. 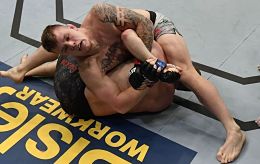 The winner of the Magomed Ankalaev versus Ion Cutelaba rematch would also make for a great next opponent. Ankalaev is ranked at No. 11, and Cutelaba surprisingly, like Crute, isn’t yet ranked.

So if Ankalaev wins, he should keep his spot, and if Cutelaba wins, he’ll be at that spot or a spot below.

The No. 8 ranked Nikita Krylov was expected to face the No. 7 ranked Volkan Oezdemir this past weekend on the same card Crute fought Bukauskas, but Oezdemir injured his knee and left Krylov without a dance partner considering.

Walker is an incredibly dangerous, athletic, powerful, long, flashy, and creative striker that has 15 knockouts to his credit in 18 overall victories, and Spann is a bit more technical, but just as dangerous, with 15 of his 18 victories coming via stoppage with 11 submissions.

Whoever’s next for ‘The Brute’, we’ll surely be tuning in, as he’ll most likely work his way further up the division, given how talented he is. It won’t be long until everyone knows his name.

What’s next for Jimmy ‘The Brute’ Crute?