No. 13 Michigan visited No. 5 Nebraska Sunday afternoon, as these two ranked Big Ten wrestling schools battled on the mat. The dual was broadcasted live on the Big Ten Network Sunday at 2:15 EST.  from the CornHuskers campus. It was the fifth annual “Tumble n Rumble”, the Wrestling and women’s gymnastics teams compete side-by-side. 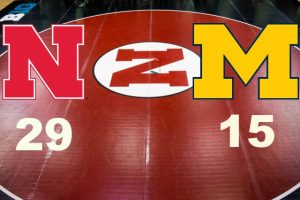 At the 133-pound weight class, Michigan’s No. 8 ranked wrestler, Micic, defeated undefeated and the No. 3 ranked Montoya, in a match Micic controlled throughout the entire seven minutes of action. Behind the five takedowns by Micic, the Wolverine won a decision by a score of 13-7.

No. 11 Colton McCrystal controlled the Wolverine, Sal Profaci in his 7-4 decision victory at 141-pounds.

Nebraska’s No. 3 Tyler Berger came up with a huge win for the red and white, as he caught No. 10 Brian Murphy on his back, after rolling him through. Berger scored the fall at 5:25  to tack on another 6 points for his team. After five matches, Nebraska went into intermission with a 15-7 lead.

The Wolverines No. 2 redshirt freshman Logan Massa took it to Nebraska’s Justin Arthur. At the end of the first period, he was leading 14-4. Massa earned a technical fall at 4:32 scoring 21 points to Arthur’s 4, giving the maize and blue five team points cutting the Cornhuskers lead to 3, at a score of 15-12.

Michigan’s No. 8 ranked freshman, Miles Amine, rode Micah Barnes out for the entire third period to force overtime. In sudden death overtime, Amine scored a takedown for the 4-2 decision victory. Amine’s win tied the team score at 15 all.

At 184-pounds, No. 3 T.J. Dudley of Nebraska stuck the Wolverine Ernest Battaglia in the first period at 1:06. The spark of Dudley’s fall not only jumped the Huskers to a 21-15 lead but the red and white went on to win the next to matches sealing the dual meet victory.

The 197-pound match was between Aaron Studebaker of Nebraska and Michigan’s Jackson Stiggow. Studebaker won via decision 2-0. In the final bout of the dual, Nebraska’s heavyweight, No. 15 Collin Jensen scored bonus points for the Huskers as he defeated Dan Perry by a technical fall (17-2) at 4:05.

The Big Ten wrestling dual meet was aired live on the Big Ten Network on Sunday. Michigan’s No. 8 Stevan Micic earned Outstanding Wrestler of the dual for his 13-7 dominant victory over No. 3 Eric Montoya. Michigan starts seven freshmen in their lineup. Michigan’s next dual is Friday, January 20, 2017, at Illinois. Nebraska’s next dual is against Minnesota on Friday, January 20, 2017.