Rebecca Evans finally made her long awaited mixed martial arts debut in 2017 after two previous attempts were thwarted. After earning a unanimous decision win in August, Evans shook of the first time fight jitters and is set to make her second walk to the cage, this time for the longest running MMA promotion in Pennsylvania, PA Cage Fight.

Evans will meet Amanda Rivera at PA Cage Fight 30 on February 10. The fight takes place at the Woodlands Inn and Resort in Wilkes-Barre, PA.

We caught up with “The Giraffe” who trains at Delaware Dragon Martial Arts to discuss the upcoming fight. 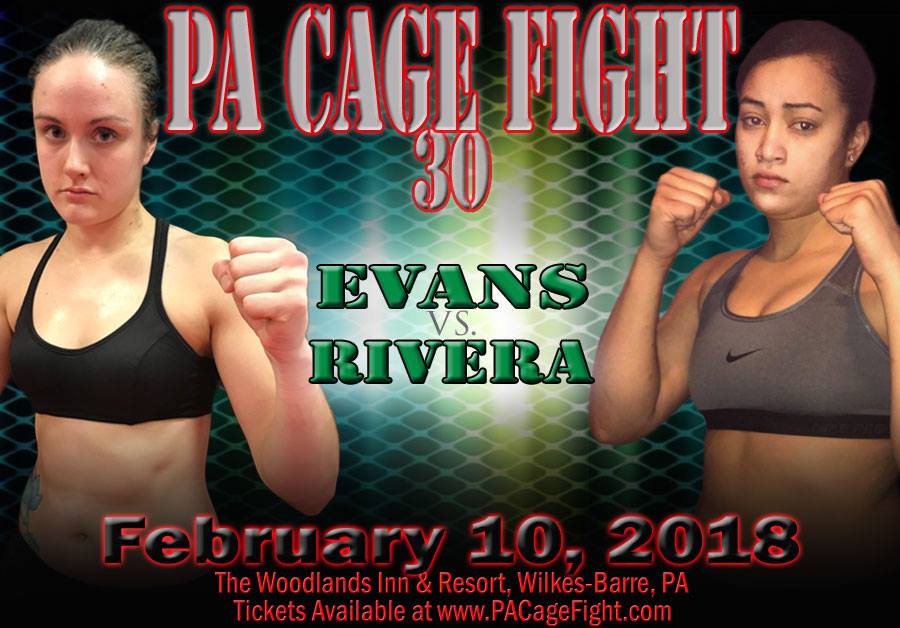 MyMMANews – Your opponent Amanda Rivera does not have any fights under her belt, how are you preparing for her without really knowing her fighting style?

Rebecca Evans – “The idea is to be dynamic. I personally don’t like the idea of Philly being good at one technique or style. At my gym, we really promote being well rounded because there is always a counter, so the best way to be prepared is to take an approach that is well rounded. Without giving away game plans, there were some things last fight I didn’t get to do or didn’t do well, so I’m hoping to use this fight to show overall improvement.”

MyMMANews – What did you learn about yourself in your first fights that will help you prepare for this fight?

Evans – “I learned a lot. First off, I learned the hard way about leaving my guard down and not having my hands up. I was really disappointed in myself about that. I also learned that I could take punches and keep walking. Before the fight I was wondering, ‘What if I get rocked and that’s it?’ After the first couple hits and adrenaline going I was fired up. I loved every second about being in the cage and it really solidified that it was something I wanted to pursue. On the conditioning and weight cutting side of preparing and going through the first fight, I learned that being at the weight that I was and cutting it in 6 weeks was really hard. I came in light but I was down the wire that week. This time around I’m using the ‘Keto’ diet, which I started right after Thanksgiving and now I’m about 2.5 lbs from fight weight at 2.5 weeks out so I won’t have to worry about dehydrating or cutting calories. I can focus on my training and staying strong.”

MyMMANews – Are you doing anything new for this fight and how do you see it playing out?

Evans – “I can’t say I’m doing anything drastically new for this fight other than continuing cross training. I’ve added in yoga to help with flexibility and recovery as well as running, biking, and lifting. I don’t really take rest days; I find that when I do I feel tight and a low the next day. Other than that we’ve been working on fine tuning things I didn’t do last time or didn’t do well with (I.e. Not finishing the armbar I had in the first round of my right-hand just irritated me after and I won’t make that mistake again). My coach always keeps me on my toes working on different aspects of my game to keep me well rounded and continually pushing me. My gym is family and I wouldn’t have it any other way.”