UFC 262: Oliveira vs. Chandler will take place Saturday, May 15 at Toyota Centre in Houston, Texas.

In this featured recap, ranked flyweight contenders Matt Schnell and Rogerio Bontorin faced of on the main card.

The vacant UFC lightweight title is on the line this evening as Michael Chandler and Charles Oliveira are set to go head-to-head for the gold in the main event. UFC 262 will mark the first time someone other than Khabib Nurmagomedov, who retired last October, will reign as the undisputed lightweight champ since April 2018.

Fan favourite and former interim lightweight champion Tony Ferguson takes on the surging contender Beneil Dariush. Ferguson is looking to bounce back after a two fight losing skid. Falling short against Charles Oliveira and Justin Gaethje – certainly nothing to be ashamed about. His last win was June 8, 2019 against Donald Cerrone.

Ranked flyweight contenders will make the walk as bantamweights on Saturday when No. 8 flyweight Matt Schnell faces No. 9 Rogerio Bontorin.

Schnell has won five of his last six, with finishes over Jordan Espinosa and Louis Smolka notably along the way.

Bontorin is replacing Alex Perez on short notice and didn’t have to cut the extra 10 pounds to the Flyweight limit, but he still failed to make weight. 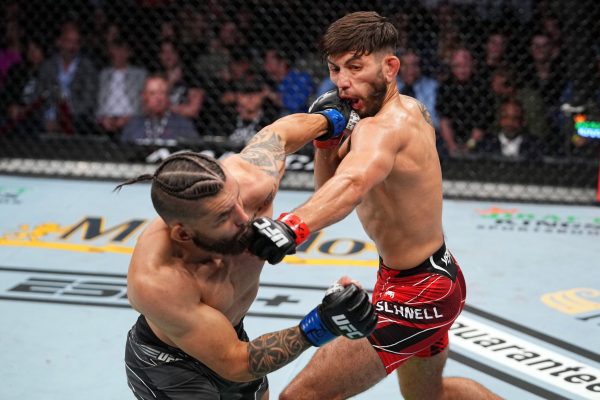 Here is how the bout between ranked Flyweights Matt Schnell and Rogerio Bontorin went down at UFC 262 round by round. For full results of the event, check them out right here.

Kerry Hatley the referee in charge. Both fighters meet in the centre, Schnell gains the centre and pushes back Bontorin. Right hand across the chin lands for Schnell. Schnell controlling the distance with his jab and low kicks. 1-2 lands on the guard of Bontorin. Bontorin lands a hard 1-2 and slips out of there. Schnell holding the center of the octagon. A very competitive round, both men having success. Bontorin really cashing in with the low calf kicks – end of round 1.

MyMMANews.com scores it: 10-9 to Rogerio Bontorin

Round 2 is underway, Schnell comes out with some more urgency. Schnell lands a high kick. They trade leg kicks, they’re circling in the middle of the cage now. Bontorin lands another low calf kick. Both men are landing right now. Bontorin finds an opening for the left again and he has Schnell on the defensive for a few seconds, but Schnell snaps back quick. Round 2 coming to a close, this is still anybody’s fights, both men are landing their punches and combinations in the round.

Third and final round. Bontorin lands early with the calf kick. Bontorin steps inside, Schnell plants his feet and lands a combination. Bontorin unloading with hard punches as Schnell is backed up against the fence. Jumping knee by Bontorin, Schnell’s mouth guard falls out. Takedown for Bontorin. Schnell staying busy on bottom, landing with anything he can. Bontorin lands in side control, landing some short elbows. Schnell forces some scrambles. Bontorin finishing the fight strong with ground-and-pound. Schnell scrambling, but this fight will end with Bontorin in top position.