Wilson, a Marine Corps Veteran, said “It felt amazing to have the privilege of being the first light heavyweight champion.  The belt represents not just my hard work but my teammates and coaches work into helping become a better fighter in each fight.

Originally from York, Pennsylvania, Wilson is part of a team that trains out of Lancaster where he has lived for the past five years.  That team is none other than Gracie 717.

Wilson’s dedication to the sport and to others is undeniable.

Wilson is notorious for donating his ticket commission to the Clare House in Lancaster. The Clare House is a home for woman and children to help provide them the tools to succeed and live an independent and positive life.  He has even ran toy drives in conjunction with WCC events during the Christmas holiday to help these families out.

As for himself; Wilson used to fight at heavyweight, coming in at around 235-pounds.  In a matter of just a few months he completely turned his life around, fixed his eating habits and workout routine, and seems to be in phenomenal shape.  Even when fighting at the heavier weight class Wilson still had impeccable cardio, but now with the decreased body size it is evident that he has improved even in that area. 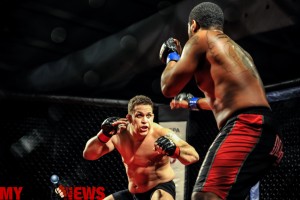 “My coaches and I are talking about defending the title in August,” Wilson said.

Fighter promoter Doug Yasinsky tells us the card will likely be held August 6 back in Lancaster.

“Honestly going pro is the last thing in my mind, just because I know I need to work on many things to even consider myself ready to be at and train at that level.  We have a few pro fighters like Blaine Shutt, Zak Kelly, Travis Creamer, Mike Liberto, Matt Lozano and Nate VanTassel, and they are my standard of being pros. I know I have a long way to get to that point and that’s ok because I believe that the talent pool at Gracie 717 and the coaches coupled with the strength and conditioning training at BA Athletics will get me closer to the professional level of fighting.”

Stay locked to MyMMANews for more on this rising star, Shane Wilson.