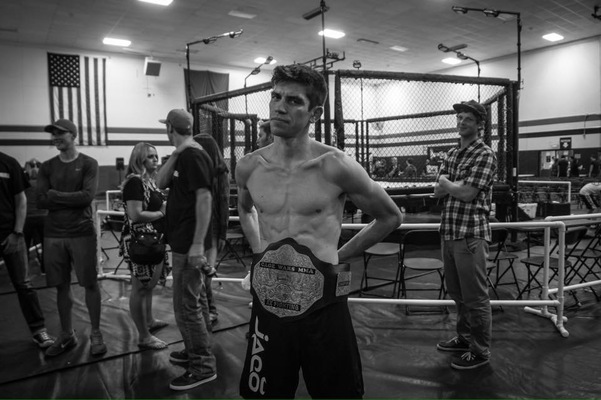 Tycen Lynn has been a martial artist all his life. His dad, a Tae Kwon Do instructor introduced him at a young age and kept him going. That was until he got burned out at around seventeen years old.

“I got really burnt out on it, me and my family, my whole family was into it, said Tycen ‘Shin to Chin’ Lynn. Every year our family and our Tae Kwon Do school would go to nationals and my dad would make us sign contracts that we’d never miss a practice and stuff. He would train us really, really hard.

Part of the reason he said he was burnt out of Tae Kwon Do was because of the judging and politics. That’s why after he placed third at nationals and he had an opportunity to join the world team, he was officially done.

Afterwards, the Everett, Washington native went into a little bit of a party phase, he didn’t have any passions and didn’t pursue college. He ended up working a few jobs, selling cell phones, long-lined on a boat and worked at his dad’s RV dealership fixing RVs and moving from job to job.

It was around when he was 24 years old (he is now thirty) that a friend asked him if he would let them use the space of the family Tae Kwon Do school and him to be a training partner for their amateur fight since they couldn’t afford a gym membership. Lynn agreed and after attending the event he signed up for a fight himself a few months later. It was the passion he was waiting to discover after feeling like he had no passions in his life.

“I didn’t feel like I had a purpose until I found MMA. So, I committed everything to it.”

“I still have a full-time job but all my spare time goes to MMA, martial arts in general.”

Tae Kwon Do was his life for many years but it’s only an aspect of his game now. Lately he has been obsessed with fixing his weaknesses. Initially that was jiu jitsu, then after being knocked out by Sean O’Malley, Lynn became obsessed with boxing to fix his hands.

After losing his last fight in February, Lynn has been working on getting back to his feet from the bottom position. He said that he got complacent going for submissions though he had success when he was standing.

That fight also taught him another lesson, not to take fights after opponents miss weight. His opponent, Journey Newson missed weight for their bantamweight matchup. Lynn bounces between flyweight and bantamweight and regrets taking the fight because he thinks he felt he was at a disadvantage.

“I don’t think, if someone misses weight from here on out that I’ll be fighting them. I think coach is putting in a new policy if your opponent misses weight the fight is off. He did some research and told me that the last 13 out of 14 people who missed weight won their fights. It’s just an unfair advantage, it’s basically cheating.”

Lynn believes he should stay in the flyweight division and he will do so in his next fight. He will fly to Hawaii to face Louis Smolka on June 23 for Destiny MMA. The Charlie’s Combat Club product , who has a 5-2 record was initially slated to fight another opponent, but the promotion called him back and said that opponent was out and Smolka was in. Lynn was very surprised to get the former UFC star as an opponent, but even more excited.

“I was in shock, I was like what? I didn’t even know he was dropped from the UFC. It was a big surprised and I was so excited.”

Main event locked & loaded for you fight fans as UFC Veteran Louis “The Last Samurai” Smolka makes his return to the Destiny MMA cage vs Tycen Lynn of Washington State. Smolka hasn’t fought in the…

The Washington native understands he will be booed when fighting the hometown hero, but after fighting in Hawaii before, he believes the experience will be fine.

“Obviously during the fight and before the fight I’m going to be hearing a lot of boos and that kind of stuff. After the fight, I’m sure it will be fine. After my last fight there everyone was super nice, came up to me and congratulated me. I love the Hawaiian people, they’re great.”

But just because he likes the people doesn’t mean he is going to give them the result that they would like to see. Lynn says he wants the finish but isn’t going to force it.

“I’m hoping to win by a finish, whether its on the feet or on the ground. I’ve learned to not to try to force something, so whatever he gives me. Just stay in the moment, stay lucid and try to win by any means necessary.”

The thirty-year-old believes this fight will be huge for his career and he hopes to parlay it into a shot on the big stage, whether it’s with the UFC, Bellator or One. But for Lynn, it’s the ability to fight great competition that makes this so appealing.

“Louis is a top guy in our division, even though he lost four in a row in the UFC, I can’t understand why the UFC cut him. He’s still young and he’s skilled everywhere.”

“That’s my favorite part of MMA, it’s facing these taunted guys, nobody wants to fight a tomato can.”

The fight between Tycen Lynn and Louis Smolka will take place on June 23 for Destiny MMA.