UFC 236 takes place Saturday, April 13 from the State Farm Arena in Atlanta, Georgia.  The event is the  UFC’s first pay-per-view conducted through the ESPN app, however UFC President Dana White feels the transition away from the traditional PPV model will be smooth sailing.

Two interim titles are on the line as the fight card is headlined by a rematch between current UFC featherweight champion Max Holloway and top-ranked lightweight competitor Dustin Poirier. The two men will compete for the interim lightweight strap, as fans eagerly await the return of the current 155-pound kingpin Khabib Nurmagomedov.

The night’s co-main event is for the interim 185-pound title. Kelvin Gastelum finally gets his shot at UFC gold as he was set to take on current champion Robert Whittaker earlier this year but had that opportunity taken away when the champion had to be sent in for emergency surgery on fight day. Gastelum meets Israel Adesanya, with the winner likely getting the immediate opportunity against Whittaker once he returns.

Dustin Poirier, Max Holloway, Israel Adesanya and Kelvin Gastelum each earned $50,000 bonuses for their performances in the UFC 236 main and co-main events.

You can order and watch the UFC 236 pay-per-view event here. 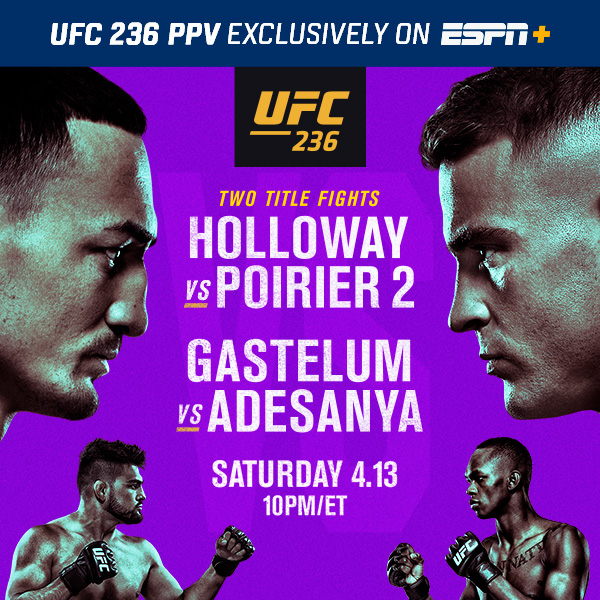 By Bjorn Morfin 13 mins ago