We have an incredible main event to look forward to this weekend at UFC 262, where the vacant UFC lightweight championship will be up for grabs between the No. 3 & No. 4 ranked contenders.

Chandler. Most believed it should’ve been No. 1 ranked Dustin Poirier facing Oliveira for the belt, but he decided to complete his trilogy with Conor McGregor this summer instead.

That leaves Oliveira to face Chandler or Justin Gaethje, with the UFC picking Chandler, considering he just finished one of the most durable talents in the entire sport, Dan Hooker via TKO in less than two minutes of his UFC debut.

Gaethje of course lost his last fight to Khabib Nurmagomedov, they wanted contenders coming off wins. Perhaps that was their thought process. 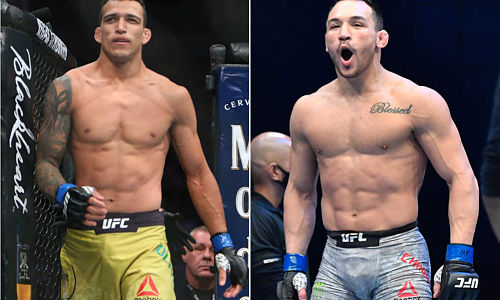 Oliveira’s last two victories come over Kevin Lee (guillotine choke) and former interim UFC lightweight champion Tony Ferguson (UD), who he nearly submitted with an armbar at the end of round one.

Chandler on the other hand is coming off three-straight KO victories, his most recent two over Benson Henderson and of course, Dan Hooker.

There was a point in each 0f their careers where none of us believed they’d actually make it to the very top of their divisions. People expected Chandler to rule Bellator, but most didn’t even believe he’d leave his longtime promotion.

Once he did, and once he was slated against Hooker, not many picked him to come out on top that night.

Chandler has lost a handful of times, but he’s come back better after each one, aside from the Will Brooks rematch. Oliveira has also lost a number of times, and quite badly in some of them.

Oliveira has been finished with strikes four times in his career, the first coming to Donald Cerrone in 2011, and the most recent coming to Paul Felder in 2017. There was also a knockout defeat to Cub Swanson in the middle there, and a TKO (injury) defeat to a rising Max Holloway.

He’s also been submitted three times, to our surprise, by Jim Miller, Anthony Pettis, and Ricardo Lamas, all BJJ black belts. Don’t let that fool you though, ‘Do Bronx’ is the best Brazilian Jiu-Jitsu fighter in mixed martial arts.

That first submission defeat came when he was in his early 20’s to Miller, which he avenged by submitting him at the

Oliveira actively hunts for submissions more than anyone in the sports history, and he also holds the all-time submissions record at 14. Demian Maia previously had the record at 11, and Oliveira just keeps breaking it. There isn’t a submission out there he hasn’t pulled off or tried to pull off in a fight.

Not only that, but his striking has gotten to a very high level as well. He’s always had good striking, five of his first six professional victories came via knockout believe it or not, one against future welterweight prospect Viscarde Andrade and one against former professional kickboxed Mehdi Baghdad.

‘Do Bronx’ just didn’t believe in his striking as much as he does now, and let’s be honest, it has improved immensely.

His first knockout victory inside the octagon almost came against 39-1 professional kickboxing champion David Teymur, who he was just eating alive on the feet, until he decided to jump on Teymur’s neck, rather than finish it with strikes. However, his next two victories both came via knockout, the first and second of his UFC career.

Many have been saying they don’t see Oliveira being able to submit Chandler, considering Chandler’s never been submitted before. Firstly, there’s a first for everything, right? Secondly, Oliveira’s by far the best BJJ fighter he’s ever fought, by a very sizable margin.

On the contrary, Chandler has some of the best distance-closing striking in the entire sport. His footwork is a thing of beauty to watch, the way he can switch stances while striking is dangerous for anyone. He’s kind of like a mix of Chad Mendes and Tyron Woodley on the feet, for his athleticism, his shuffle-steps, and his power.

Looking back on Oliveira’s record, there aren’t many opponents that beat him that we still feel would beat him today.

Something similar could be said for Chandler, who opened up his career with a perfect 12-0 record, then immediately fell to 12-3.

Those first two defeats came via five-round split decision, both of which he could’ve easily gotten the nod in, then he was TKO’d by Will Brooks in that third defeat.

Since this, Chandler has only lost twice, once via injury to Brent Primus, which he avenged handily in the rematch, and the other to longtime Bellator featherweight champion Patricio ‘Pitbull’ Freire via TKO in just 61 seconds.

Chandler was hurt, but many were left thinking it was an early stoppage. Far more people thought that than not.

Point being, Chandler could easily be 25-2, rather than 22-5, and Oliveira may just be the best lightweight in the sport.

Who do you see winning this epic vacant UFC lightweight championship fight at UFC 262?