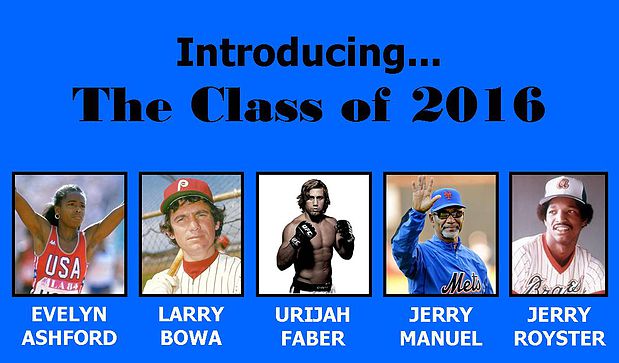 “I’m honored to be acknowledged by the fans and have great pride in representing Sacramento,” Faber said. “Hopefully Im the first in a long tradition of Mixed Martial Artists to be inducted in the Sacramento Spots Hall of Fame. Its incredible to be included and along side of these tremendous athletes.”

Fans cast their votes during the open voting period of October 1st – November 15th at www.sacsportshof.com. The top five vote getters represent the Class of the 2016. There were 48 nominees from nine different sports on this years ballot. This years class is historic as it represents local legends from past and present that all achieved the ultimate prize in their respective sports; be it a world championship ring, belt or gold medal.

The 4th Annual Sacramento Sports Hall of Fame Induction Celebration will again feature past inductees attending and honoring the Class of 2016. This fan friendly event features appearances and
speeches by the inductees as well as video tributes and live entertainment in a fun filled atmosphere. 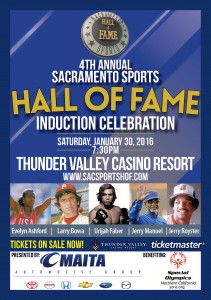 Tickets are on sale now at Thunder Valley Casino Resort and at ticketmaster.com. For all information regarding the Saramento Sports Hall of Fame and event information visit www.sacsportshof.com

High School: Lincoln
College: University of California, Davis
* Gladiator Challenge Bantamweight Champion (2004)
* King of the Cage Bantamweight Champion (2004)
* WEC Featherwieght Champion (2006)
* Professional Record: 32 – 8 (7 KO, 19 Submission)
* Brown Belt in Brazilian Jiu-Jitsu
Urijah Fabers path to success came much differently compared to many of the athletes coming out of high school. After growing up in Isle Vista, California, Urijah and his family moved to
Lincoln where attended high school. During his time there he was a two sport star excelling on the football team as an all league cornerback and running back. He was future would come as
a wrestler but not in the scholarship variety. He got into UC Davis because of his academic skills and was a walk-on as part of the Aggies wrestling team. It didnt take long for the
coaching staff to award him a scholarship after a stellar showing at the end of his freshmen year.

Urijah finished his college career with most wins in program history.
Known as The California Kid, Urijah made his professional MMA debut as part of the Gladiator Challenge promotion on November 12, 2003. Seven months later he defeated David Velasquez
becoming the new GC Bantamweight Champion. After one title defense he began fighting with King of the Cage as well. In 2006 Urijah competed for the first time in World Extreme
Cagefighting (WEC) and captured the World Featherweight Title by defeating Cole Escovedo by doctors stoppage in the 2nd round. He later returned to King of the Cage and defended his title
for record 5th successful time.

In 2010 Urijah moved to his current home of the UFC. He defeated former WEC Bantamweight Champion Eddie Wineland in his debut on March 19, 2011 at UFC 128. A rematch with Dominick Cruz, whose only defeat came by Faber in 2007, took place on July 2, 2011 at UFC 132 in which Faber lost via unanimous decision, but earned Fight of the Night honors.

Faber faced Brian Bowles on November 19, 2011 at UFC 139. Where he won Faber with a second round submission (guillotine choke), earning Submission of the Night honors.
Urijah continues to fight in the UFC and is one of the most respected and recognized fighters in the world. He continues to live and train in Sacramento at his family Fitness downtown
location. He founded Team Alpha Male which has produced several championship fighters and has appeared on the reality television show The Ultimate Fighter where Team Faber was the
focus of season 15.

Urijah Faber is a true home town down to earth guy who has fought his way to the top of his sport and represents the town of Lincoln and Sacramento proudly. His induction into the
Sacramento Sports Hall of Fame is historic as he is the first Mixed Martial Artist to be recognized for his glowing accomplishments and crowd pleasing style.