Tim Means had a very entertaining fight last weekend at UFC 255, as he out-struck Mike Perry pretty much throughout it. He got out-grappled by Perry in the first half of round one, but from the midway point of round one to the end of round three, Means used his range and volume striking beautifully. 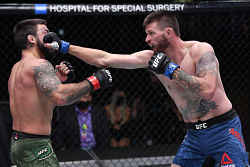 Perry was initially slated against former UFC Welterweight Champion Robbie Lawler at the same event, but Lawler withdrew himself from the bout and was replaced by Tim Means.

He was taken down and controlled, and nearly submitted (rear naked choke/neck crank) by Perry early on, but he kept his composure, didn’t let it happen again, and used his superior skill set to win the fight. 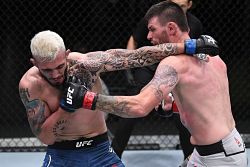 Staropoli is also an incredibly talented individual, he’s in some ways the future of our beloved sport. Means has had a back-and-forth career thus far, trading wins and losses frequently. He came to the UFC with a record of 16-3-1 as a lightweight.

While Means won those first two promotional fights, he lost his next two to Jorge Masvidal and Danny Castillo, both via unanimous decision, before being released from the UFC. He secured two knockout victories in just four months under the LFA banner, and he was resigned to the UFC before a year was up.

Means came back to the UFC as a welterweight, and this is where he’s had most of his success. Though he lost his return bout to Neil Magny, he rattled off four-straight victories immediately afterward, finishing both Dhiego Lima (TKO) and George Sullivan (arm-triangle choke). 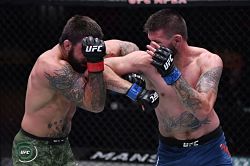 He was then submitted (guillotine choke) by Matt Brown after being hurt with an elbow, and he followed that defeat up with back-to-back knockout victories over John Howard and Sabah Homasi. Howard just KO’d Ray Cooper III last year, and Homasi has been doing extremely well in Bellator.

Means has since gone 5-5 (1 NC), but is on his first winning streak since 2016. He lost his first fight of 2020 to Daniel Rodriguez (guillotine choke) back in February, but he’s ending it on a two-fight win streak against surging talents. Perry isn’t so much a surging talent anymore, he’s kind of failed to evolve, but he’s still a very dangerous opponent for anyone.

Means is really starting to come into his own. He’s a very well rounded talent that’s dangerous everywhere.

This begs the question, what’s next for Tim Means? 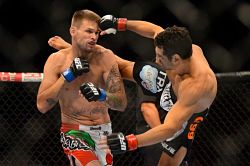 Former WEC & UFC Lightweight Champion, and the No. 12 ranked UFC welterweight contender Anthony Pettis would make for an incredibly fun fight. They’re both great strikers with good grappling. Actually, Pettis is one of the most skilled and opportunistic submission artists in the game.

Chiesa is the only one of them that doesn’t have a Brazilian Jiu-Jitsu black belt, but he’s one of the best MMA grapplers in the sport. He has great wrestling and great submissions, having submitted both Jim Miller and Beneil Dariush, two very high level black belts, both via rear naked choke. 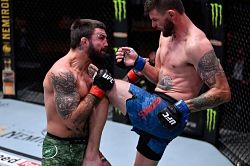 The winner of Santiago Ponzinibbio and Muslim Salikhov would also make for a really fun fight. They’re both great strikers with great records. Ponzinibbio is 27-3, and he’s a very talented boxer that has some great kicks to go with it. Salikhov went 185-13-1 in professional kickboxing, enough said.

The winner of Li Jingliang and Dwight Grant is also a fight you can’t go wrong with. Means versus either of them would make for a very exciting fight. Both Jingliang and Grant are great boxers with incredibly heavy hands. They both throw loopy-like punches, but also have some good straight attacks.

At 36-years-old, it appears Means is better than he’s ever been. He’s such a technical talent; he has great jabs and crosses, great front snap kicks, he has a killer instinct, he’s a very good fighter, underappreciated even. Maybe he’ll finally start getting the respect he deserves.

What’s next for Tim ‘The Dirty Bird’ Means?

By Blaine Henry 25 mins ago