Anthony Smith had perhaps the best performance of his career last night at UFC Vegas 15, as he handily defeated Devin Clark in the light-heavyweight main event.

Clark came in and tried to press the action right out of the gate. He landed a nice overhand right on Smith, and ran toward him, backing Smith up in order to tie up with him, and perhaps secure a takedown. 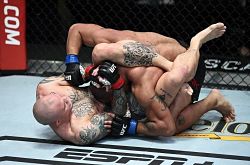 ‘Lionheart’ Smith was ready for this however, as he immediately secured double underhooks and turned the corner, putting Clark on his back just 12 seconds into the fight.

Once he had Clark down, he scooted him out to the center of the cage, making sure he wouldn’t be able to wall walk.

Smith ended up getting one hook in, but not the other. It looked like he was trying for a twister, but Clark was wise to it and spun into Smith’s guard. About 30 seconds later, Smith wraps Clark up in a triangle choke that was beautifully set up.

Once Smith got Clark’s arm across his face, Clark started viciously trying to punch his way out of it, and that almost always spells the end. That’s not the correct way to defend a triangle choke, it’s a last ditch effort. 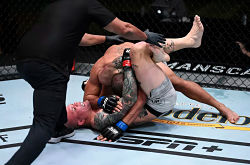 Smith defeated Clark via submission (triangle choke) at 2:34 of round one, putting a stop to his losing streak.

The sheer experience Smith has aided him in winning this fight. He knew what he had to do once he had Clark down, he knew how to get him down quickly and use his leverage against him.

Clark’s a skilled wrestler too, he’s a two-time NJCAA All-American and a one-time national champion. The other year he placed fourth, and he was also a state champion in high school, and Smith took him down with ease.

We were thinking five rounds would aid Smith, and it probably would have. They’ve both shown they sometimes get tired in their fights, but Smith is the superior striker, and he’s evidently the superior grappler. If it would’ve went later and Clark was getting the takedowns he needed, he probably would have been submitted anyway. 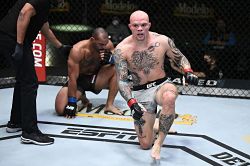 That’s something people don’t know about Smith for some reason. He did spend a good amount of his earlier career being submitted, but he’s really tightened his grappling up, he’s now a Brazilian Jiu-Jitsu black belt, has been for a couple years now, and it shows.

Smith came into this fight ranked at No. 6, and he probably won’t move up the rankings following this performance, considering Clark wasn’t ranked coming in. Clark was however coming off a two-fight win streak, one of which was a pretty big upset over surging talent Alonzo Menifield.

Smith was on a two-fight skid, losing to Glover Teixeira and Aleksandar Rakic in his last two fights. He was doing great in the Teixeira fight, he was handily piecing him up for the first two rounds.

Anthony Smith expended too much energy in those two rounds however, and took a beating in rounds three, four, and up until it was stopped in the middle of round five. Rakic dominated him all three rounds with his wrestling.

It was starting to look like Smith may not have much left in him, he’s been in so many wars, he’s taken so much damage throughout his career. He looked as fresh as ever last night at UFC Vegas 15 though, he’s been rejuvenated, and it’s awesome to see! Who doesn’t love Anthony Smith?

Will Jake Paul Ever be Taken Seriously as a Boxer?