We have yet another Russian talent making waves in the mixed martial arts world, and his name is Movsar Evloev.

This kid has been a prodigy ever since we first saw him compete. He came over from M-1 Challenge, where all of his first ten fights took place. 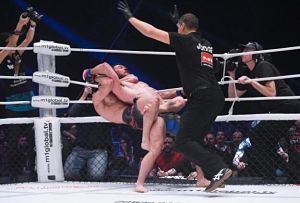 Evloev won the M-1 Challenge interim bantamweight championship in his seventh professional fight via KO (head kick) in round two, and unified the title in his next outing via five-round unanimous decision.

He defended his title twice; once against Sergey Morozov via submission (rear naked choke) in round three, and the other Rafael Dias via KO (punches) in round five.

Next came Evloev’s UFC debut, where he defeated professional Muay Thai champion Seung Woo Choi via unanimous decision. Evloev followed this up with a unanimous decision victory over Enrique Barzola, one of the most prolific takedown artists in featherweight history, before facing another highly skilled wrestler. 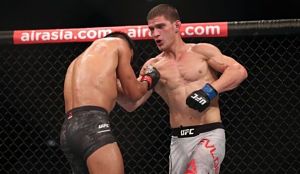 That other highly skilled wrestler is freestyle wrestling Olympian Mike Grundy, who was able to take Evloev down a couple times, but was ultimately pieced apart with Evloev’s striking. Evloev also won this fight via unanimous decision.

This brings us up to Evloev’s last bout, where he defeated Nik Lentz via split decision at UFC 257. No one agreed with this being a split decision, and many of us were pretty shocked to see not one judge give Evloev all three rounds.

Lentz did have Evloev locked in a tight guillotine choke a couple times throughout round one, but got beat up the entire second half of it, as well as the next two. Nonetheless, two of the judges gave it to the correct man, bringing Evloev’s professional record to 14-0. 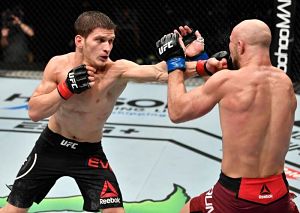 The one thing fans could criticize Evloev of is that he hasn’t been much of a finisher since coming over, winning all four of his UFC bouts via decision. That doesn’t take away from how talented this young man is though, he’s as skilled as just about anyone in his division.

After going 4-0 inside the octagon, what’s next for Movsar Evloev? He should be closing in on the top 15 very shortly, he’s given us nothing but stellar performances thus far into his career. At just 26-years-old, turning 27 next month, we’ve got some time before we see Evloev’s true potential.

No. 15 ranked Edson Barboza would be a great test for him. Barboza’s one of the most dangerous strikers in the entire sport. He went 25-3 as a professional kickboxer, winning 17 different titles in the process. Not to mention, Barboza’s a black belt in Muay Thai, as well as a black belt in Taekwondo. 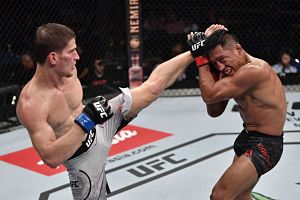 Ilia Topuria would also make for a great fight against Evloev. This kid hailing from Spain is also an absolute prodigy, and has gone 2-0 thus far into his UFC career, improving his professional record to 10-0.

Lastly, is a match up against No. 9 ranked Arnold Allen. Now, Allen is pretty far up the rankings compared to the last two names mentioned, but he too is coming off a unanimous decision victory over Nik Lentz, his back in January of 2020.

Allen is 16-1 through his professional mixed martial arts career, including a 7-0 stint with the UFC thus far. Allen, like Evloev, is as technical as they come, and they’d make for a great match up opposing one another.