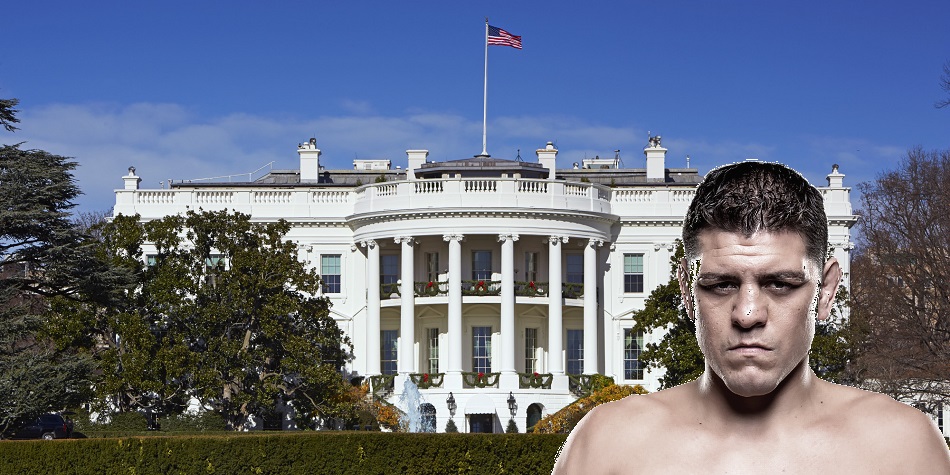 After failing a drug test for a third time in Las Vegas, UFC fighter Nick Diaz was suspended for five years and fined $165,000 by the Nevada State Athletic Commission.  Diaz fought Anderson Silva in January losing a unanimous decision.
An online petition launched on the White House website in support of Diaz and a repeal.  In order to receive a response from the government it was required that the petition obtain 100,000 signatures.  Below is their official response.
https://petitions.whitehouse.gov/response/response-your-petition-suspension-nick-diaz
OFFICIAL WHITE HOUSE RESPONSE TOLift the NSAC ban from MMA fighter Nick Diaz.

A response to your petition on the suspension of Nick Diaz:

A response to your petition on the suspension of Nick Diaz:

Thank you for your petition regarding the Nevada Athletic Commission’s suspension of Nick Diaz.

The federal government plays no role in the disciplinary actions taken by state athletic commissions, so we are not in a position to address the specific request raised in your petition. State authorities — in this case, the Nevada Athletic Commission — will generally be the best source for information about those kinds of issues.

However, we appreciate that so many of you banded together to make your voices heard through this platform.

If there are federal policy issues you care about, using this tool can help you and people all across the country communicate directly with a team in the White House focused on responding to petitions that get enough support. For example, in the past few years, we’ve weighed in on issues ranging from education regulations to wildlife trafficking, from criminal justice reform to vaccinations, and from electronic communication and net neutrality to international relations.

And, if you signed this petition because you’re curious about the Administration’s position on medical marijuana, check out these past responses to petitions on that issue:

We hope you’ll continue to participate on the platform.

— The We the People Team