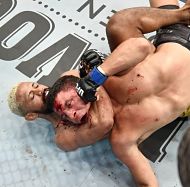 That’s right, he’d only ever lost to two goats, and a prodigy in a fight he could’ve gotten the nod in, and he’d only been finished once. He also has a win over Henry Cejudo, and many, many other top talents.

Figueiredo just walked right through Benavidez both times, knocking him out the first time, though there was a clash of heads leading up to it, and now this one, knocking Benavidez down three times in less than one round before choking him unconscious with a rear naked choke. It was one of the most masterful, one-sided performances we’ve ever seen, especially in a title fight. Now that the Benavidez chapter is over, who’s next for our UFC Flyweight Champion? 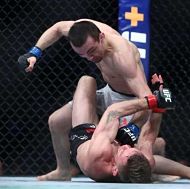 There are two names to really consider, Askar Askarov (12-0-1) and Brandon Moreno (17-5-1). Askarov just defeated the No. 4 flyweight contender in Alexandre Pantoja, who was going to be the backup for the title fight later that night, should Figueiredo had missed weight again. Askarov is the former ACB Flyweight Champion; he won the belt via fifth round anaconda choke when he was just 7-0, defended it via third round twister, and defended it again via second round guillotine choke before joining the UFC.

Oddly enough, Askarov fought Moreno in his UFC debut, Moreno’s return fight, and it resulted in a draw. It was such a close back-and-forth fight, it could’ve easily gone either way. Since then, he’s defeated both Tim Elliott and of course Pantoja via unanimous decision.

Moreno made his UFC debut before the finale, unlike most, submitting Louis Smolka with a guillotine choke in round one. He then defeated Ryan Benoit via split decision at the finale, and Dustin Ortiz via rear naked choke in round two, before losing his next two via unanimous decision to Sergio Pettis and Alexandre Pantoja. He was then cut by the UFC, only to fight once and win another title. Moreno won the LFA Flyweight Championship via fourth round TKO of Maikel Perez, and just over a year after being cut, he’s back in the UFC. 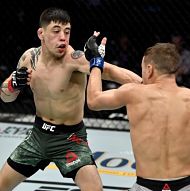 Since coming back, Moreno has gone 2-0-1, having that draw with Askarov, and defeating both Kai Kara-France and Jussier Formiga via unanimous decision. Either of these two would make for a great match up with Figueiredo, they’re both so dangerous and well rounded. Moreno has always had great boxing, but it’s really been tightened up over the years, and he’s always had a great submission game. Askarov has some good stand up and great wrestling, as well as submissions to threaten anyone he fights.

Figueiredo has only ever lost once, which was to Jussier Formiga via unanimous decision. He was taken down and held there on his back for the majority of the fight, but he’s surely improved since then, he needed that loss. He came to the UFC with an 11-0 record, and in just over a year went 4-0 with three TKO’s. He then lost to Formiga, then defeated Alexandre Pantoja via unanimous decision, Tim Elliott via guillotine choke in round one, then Benavidez by knockout in round two and rear naked choke in round one. 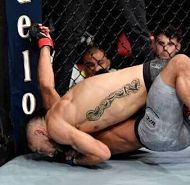 Our flyweight champion is in his prime at 32-years-old, while Askarov is 27-years-old, and Moreno’s still only 26-years-old. Nonetheless, they’re the two most deserving of a title shot at 125 lbs. An argument could also be made for the 28-year-old Alex Perez (24-5), who’s 6-1 inside the UFC with four finishes, on a three fight win streak. He’ll probably have to fight again, at least once more, considering there are two more deserving contenders at the moment, but he’s definitely a guy to keep an eye on, he gets better every time we see him.

Who’s next for Deiveson Figueiredo?