Bellator MMA has held events in England and Italy, along with a show planned for Israel next month. But with the recent signing of their Irish prospect, 19-year-old featherweight James Gallagher (4-0), Bellator President Scott Coker says that plans to head to Ireland are in the works. 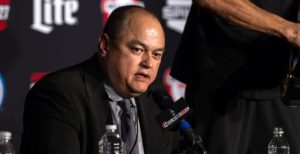 “I can’t talk in too much detail just yet but I think you’ll see us in Ireland sooner than you might expect. Probably before the end of this year we’ll have a fight in Ireland,” Coker told The42.

“James is a young kid but we have a lot of faith in him that he will develop into a big star for Bellator all over the world,” said Coker, who’ll be in Tel Aviv on 10 November when Gallagher takes on Kirill Medvedovsky at Bellator 164.

“He’s a talented fighter but he also brings more than just fighting to the table. How he carries himself outside of the cage, he’s years ahead of his age in terms of how he handles himself. It’s really impressive for such a young guy. What he achieves will be up to him.”

Coker added that Bellator intends to increase the Irish presence on its roster: “We’re working with some of the top camps in the UK and Ireland in trying to find the up-and-coming new talent that will be the future of the sport. There are a lot of great fighters from that region and we’re always looking for the next guy or girl to bring to Bellator.”

The UFC has obviously found success with their Irish star, Conor McGregor so it makes all the sense in the world for Bellator MMA to piggyback and see what they too can do with the ever increasing Irish mixed martial arts fan base.