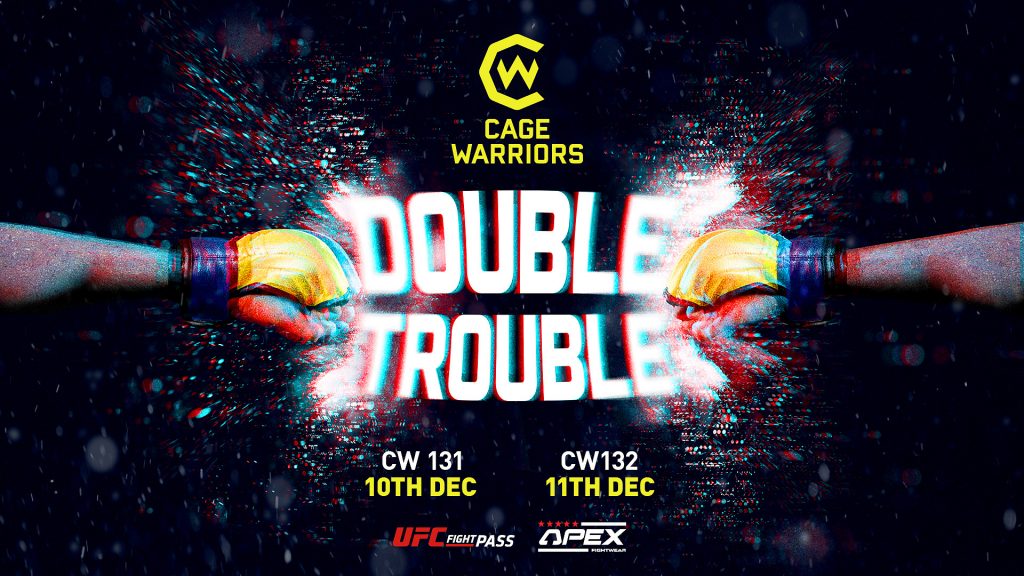 Cage Warriors returns this weekend, as the prominent European promotion descends on London’s York Hall once again with a pair of fight cards labeled “Double Trouble.”

Following a trio of “TRILOGY” fight series earlier this year, Cage Warriors 131 and 132 will witness four championship titles up for grabs, split across Friday 10th and Saturday 11th December to close out the 2021 fight schedule.

In Friday’s co-main event, George Hardwick (8-1) and Mehdi Ben Lakhdhar (5-0-1) square off for the vacant lightweight championship. Champion Joe McColgan voluntarily relinquished his title last month due to a busy personal schedule preventing him from training. McColgan’s departure opened the pathway to a mouth-watering scrap between Hardwick and Ben Lakhdhar, with the now former champion expected to face the winner in early 2022. Hardwick is on a four-fight win streak, notching back-to-back stoppages since joining the Cage Warriors ranks in 2021. Meanwhile, Ben Lakhdhar is undefeated in MMA, his sole question mark a draw against the aforementioned McColgan. “The Last Uchiwa” has three first-round KOs to his name, most recently stopping Stevie McIntosh with a left hook at Cage Warriors 117. 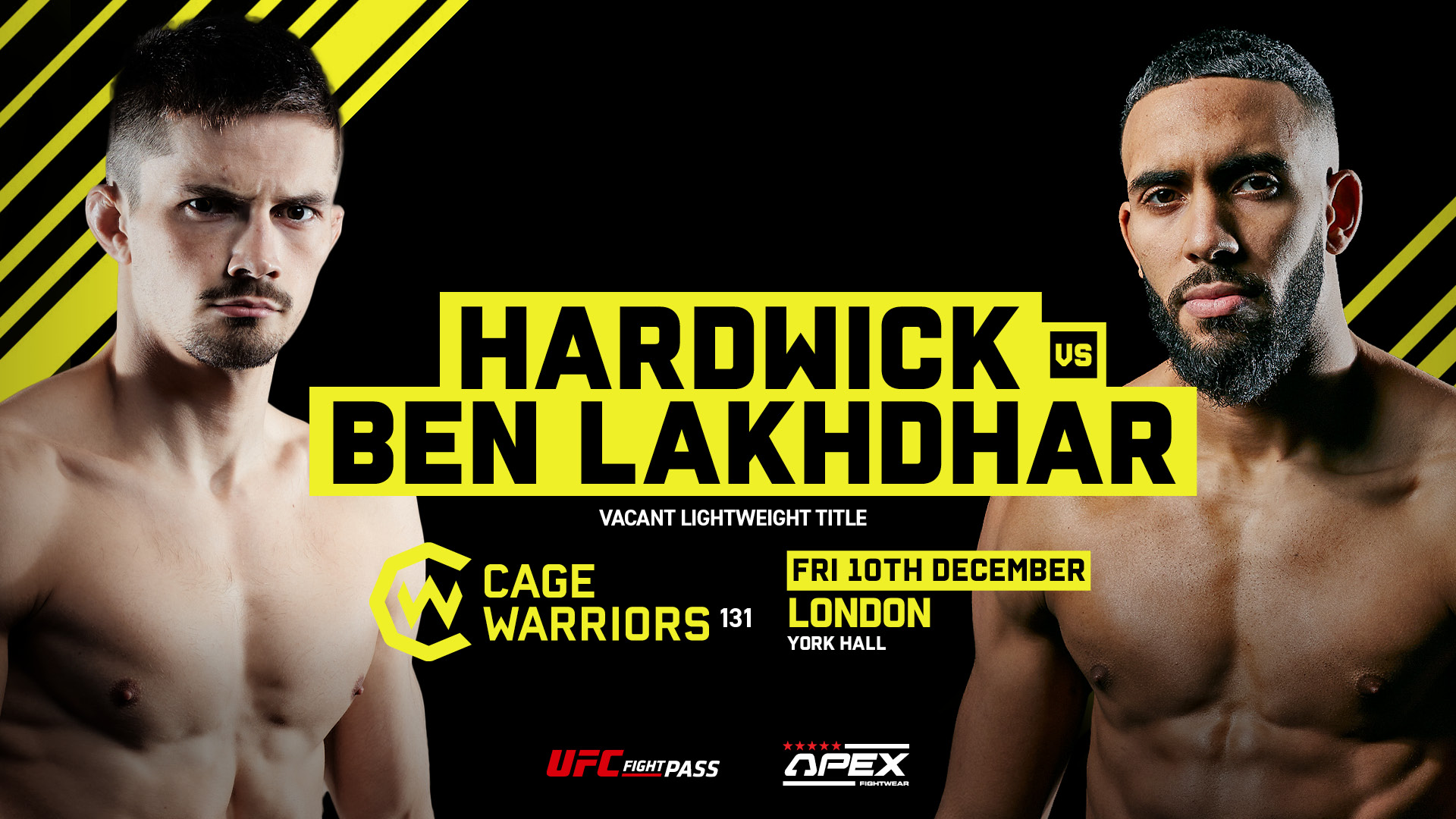 In the main event of CW 131, Matthew “The Beast” Bonner (10-6-1) is set to make the first defense of his middleweight title when he faces the undefeated Djati Melan (7-0). One of the great stories of the Cage Warriors pandemic era, Bonner rose from a 6-6-1 afterthought to become champion in the space of four fights. The Next Gen Liverpool fighter stopped prospect George Smith, bested veteran Matt Inman via decision, finished former champion James Webb via standing TKO before finally capturing the title by submitting sitting champion Nathias Frederick. With one eye on a move to 170lbs to chase “Champ Champ” status next year, “The Beast” must get through Melan first. The France-based fighter competed once before in the Cage Warriors yellow gloves, knocking Arvydas Juska out in the first round at CW 80. Since then, Melan has notched another two wins against a combined 13-2 opposition. This will be his first time competing since December 2019. 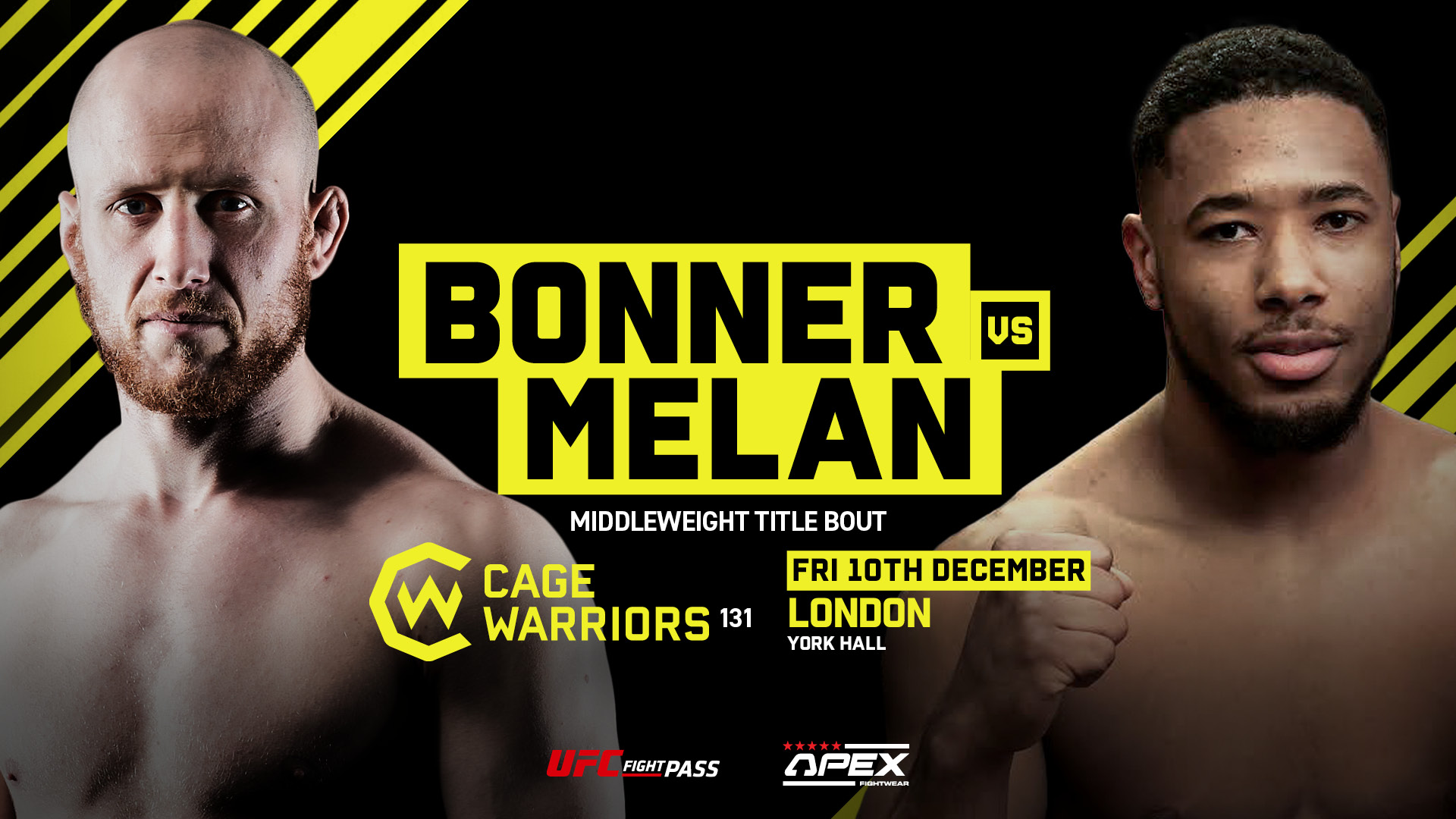 Sam “Urai” Creasey (15-3) and Luke “The Apocalypse” Shanks (8-3) will collide once again as they rematch for the flyweight title in Saturday’s co-main event. On his third championship attempt, Creasey finally emerged with the Cage Warriors belt when he submitted Shanks via third-round guillotine choke last time out at CW 129. However, it wasn’t long before controversy arose. Shanks is adamant that a Creasey tap went unnoticed in round 1 of their first fight, after Shanks appeared to have an armbar in the opening grappling exchange. So, here we go again. Shanks has an opportunity for redemption, and Creasey an opportunity to put a stamp on his first performance and leave no doubt once and for all. 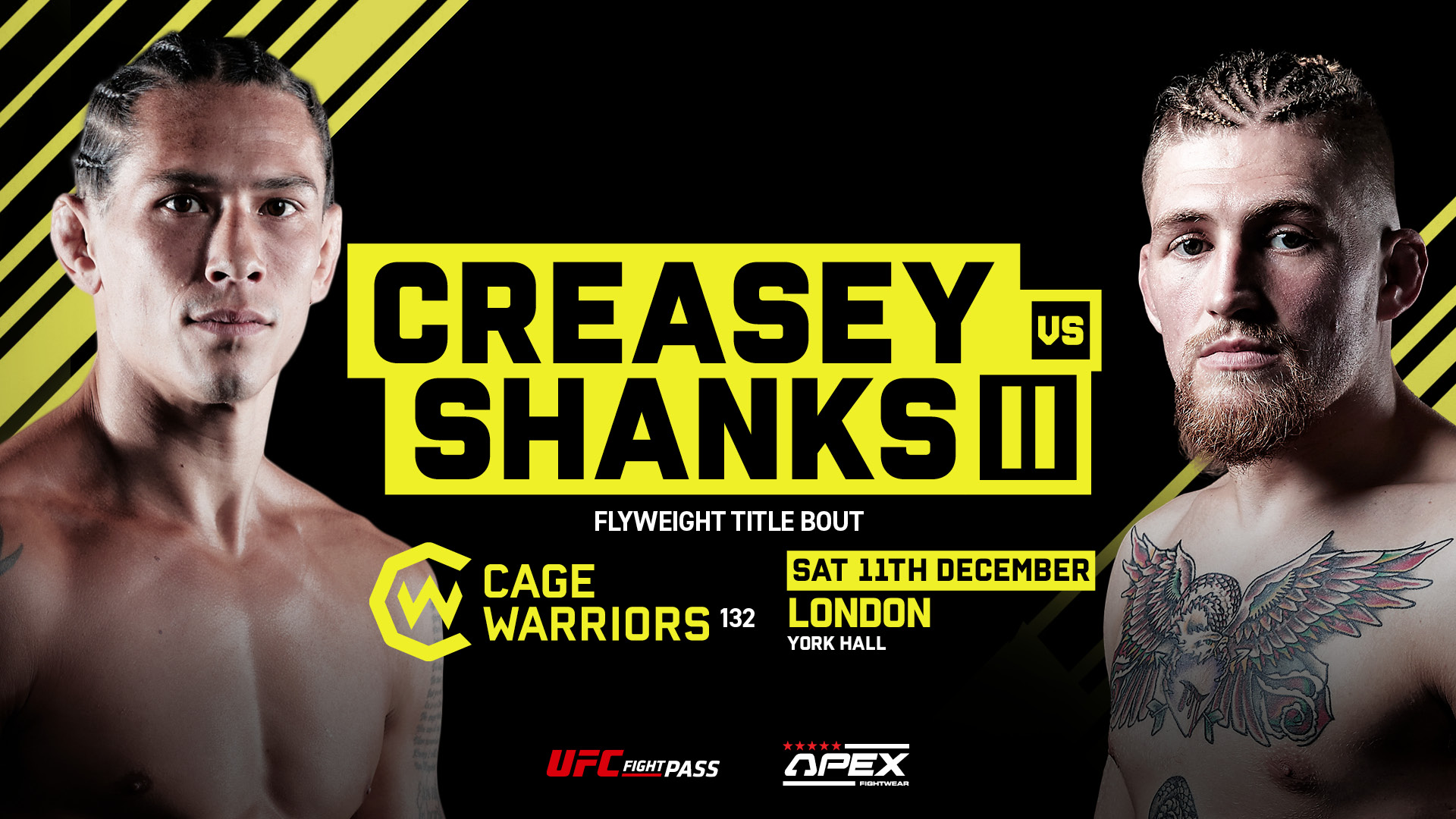 To round out the weekend’s action, Dominique “Black Panther” Wooding (8-4) will defend his bantamweight strap for the first time against Carlos “Crocodilo” Abreu (9-3) in the CW 132 main event. Wooding has displayed statement performances since joining Cage Warriors, knocking out Cameron Hardy in the first round of his promotional debut, before stopping then undefeated prospect Nathan Fletcher in third round of their championship contest. The champion views this fight against Abreu as his UFC audition, and Wooding is hoping to receive a call up to the UFC London card in March should he emerge victorious on Saturday night. The challenger Carlos Abreu will make his Cage Warriors promotional debut as he vies for bantamweight glory. With one TKO and four submission wins thus far in his career, Abreu has won four of his last five fights, most recently earning a second-round victory over Amauri Maia at RFA Fight 1 in August. 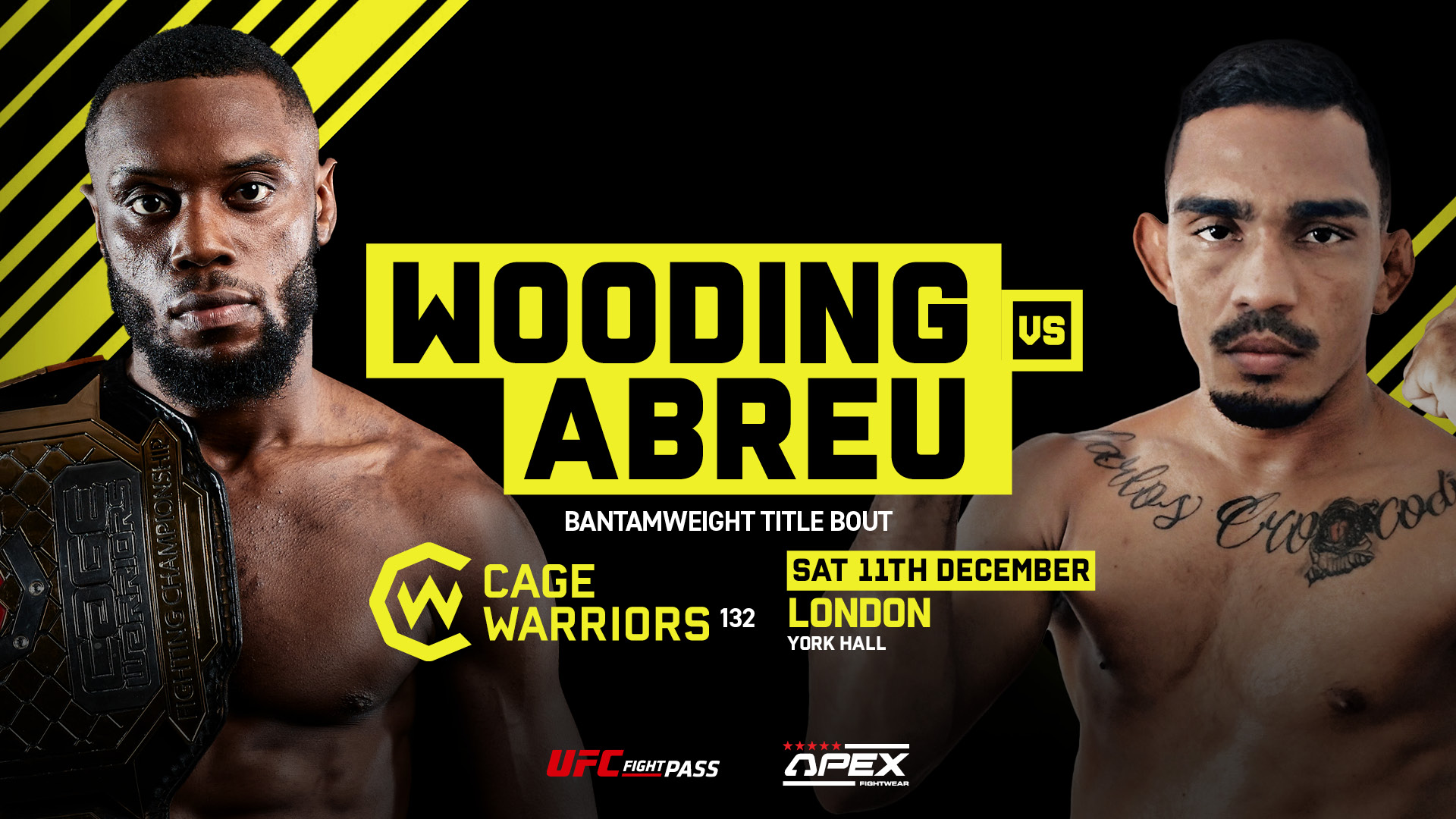 Fans can watch all the Cage Warriors 131 and 132 action LIVE on UFC Fight Pass.

By Mike Pendleton 35 mins ago