CM Punk, aka Phil Brooks, understands the criticism surrounding his UFC career, and leading up to his fight at UFC 225, he seems to be very honest about his standing inside the promotion. Punk, a former WWE superstar champion, is 0-1 inside the UFC.

In his first and only fight inside the UFC, Punk suffered a first-round submission loss to Mickey Gall at UFC 203 in Cleveland. Not only was it Punk’s first fight inside the UFC, it was his first ever professional MMA fight as well. Punk has been given a second chance inside the promotion and he will take on Mike Jackson at UFC 225 in his hometown of Chicago.

With Punk being a huge star over in the WWE, he has had quite the fan following even in his short MMA career. It’s because of that following and the fact that he’s fighting at home in Chicago, that Punk finds himself on the pay-per-view main card for a stacked UFC 225.

It was announced that Punk vs Jackson will open the pay-per-view main card on June 9, which has made some other top fights fall down to the prelim card. Upon receiving some criticism for his fight’s placement on the card Punk responded on Twitter to UFC Hall Of Famer, Mark Coleman with some surprising words on his own fight, saying if it was up to him he’d be the first fight of the night on UFC Fight Pass. 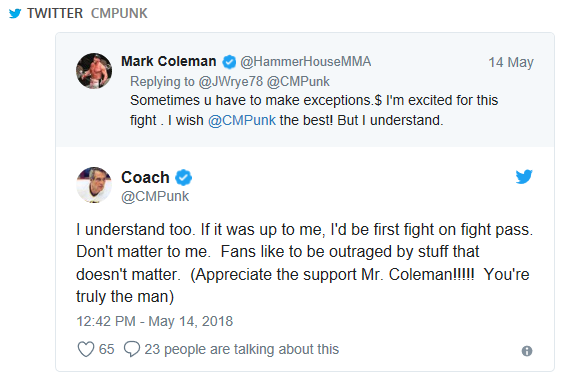 Both Punk and Jackson will enter the fight looking for their first win under the UFC promotion.

Here’s the entire fight card for UFC 225 which takes place on June 9 at the United Center in Chicago, Illinois: