Daniel Rodriguez is uninterested in watching tape on his UFC on ESPN 26 opponent Abubakar Nurmagomedov.

Rodriguez can tell by the last name that the Russian fighter likes to wrestle. Nurmagomedov is the cousin of former unbeaten UFC lightweight champion Khabib Nurmagomedov after all.

Rodriguez plans on making Nurmagomedov fight his style at the UFC Apex in Las Vegas, Nevada on July 17.The 34-year-old expects a standing affair, claiming Nurmagomedov will be unable to take him down.

“At the end of the day, he’s not Khabib. He’s like the not so great cousin,” Rodriguez said.

“The UFC put him to the test and after I [Expletive] rock his world, he for sure is going for the takedown.”

It’s no mystery where “D-Rod” plans to take this fight. He currently ranks first on the UFC roster in strikes landed per minute with 8.05.

He is fresh off a unanimous decision win over Mike Perry where he outpointed the contender for all three rounds at UFC on ABC 2 last April.

Rodriguez currently holds just one knockout victory in five UFC fights, a first-round finish over Dwight Grant in August 2020. The California native is the owner of seven TKO/knockout victories, making up for half of his career victories.

“I am going to stick true to my roots, I ain’t trying to wrestle,” Rodriguez said. “I have the wrestling defense, but at the end of the day, I am going to sock this mother [expletive] up.” 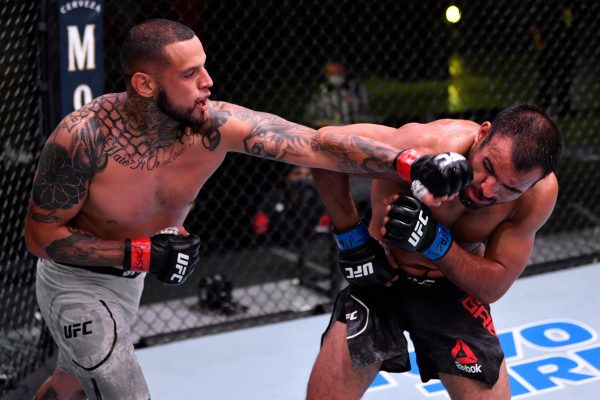 Knowing a thing or two

Rodriguez is yet to watch any film of his opponent, but he does know the Nurmagomedov’s record and statistics. The Russian split his first two appearances inside the octagon, most recently beating Jered Gooden via unanimous decision at UFC 260 last March.

Nurmagomedov is no stranger to dragging out fights, winning six of his last eight victories by decision. If the fight does go to the ground, Rodriguez is confident he has the upper hand in the grappling department.

This is Rodriguez’s first fight camp in his new home at Syndicate MMA in Las Vegas, Nevada. Although Rodriguez spent time training in California and even in Mexico with UFC featherweight Yair Rodriguez, Las Vegas is his new home.

He is fighting under coach John Wood and mixing it up daily with the like of sixth-ranked welterweight Michael Chiesa and 11th-ranked middleweight Sean Strickland, among others.

“I got some killers shooting on me everyday,” Rodriguez said. “This is why I came here, I don’t want to be the best guy in the gym. All these guys are better than me at something, I’m not going to lie. I got my talent, but at the same time, I am learning from every single one.”

Rodriguez is a winner of nine out of his last 10 bouts. He is coming off one of his most notable wins after a dominant performance over Perry. The Californian  is seeking bigger names in the division.

Nurmagomedov is a popular name in the sport to say the least. For Rodriguez, the bigger the name, the closer he is to getting a number next to his.

“I’m about to get more shine,” Rodriguez said. “This is a big name too, It’s going to shoot right to the mother [expletive] ranks.”

By Adam Martin 10 mins ago