We have a truly epic lightweight contest going down next weekend at UFC 264, as former interim champion Dustin 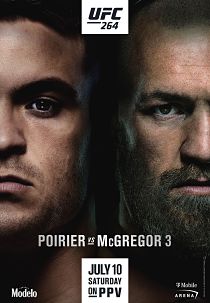 Poirier and former champ-champ Conor McGregor go to battle for the third time in the scheduled five-round main event.

Of course, as we know, each of these men boasts a knockout victory over the other.

McGregor TKO’d Poirier in just 106 seconds back in 2014 en route to winning the interim, and undisputed featherweight championships, and Poirier just TKO’d McGregor at 2:32 of round two in January, a surprise to most.

We all knew Poirier had evolved drastically since their first, as had McGregor, or so we thought.

What we got out of McGregor that night at UFC 257 was a devolved version of himself. He’s always been a great boxer, but when that’s all he uses, he’s incredibly vulnerable to losing the fight.

Just look at their first fight, look at most of McGregor’s previous fights and victories.

He comes out throwing all sorts of kicks, then finishes his opponents off with his hands.

In the first Poirier fight, he came out throwing a number of wheel kicks and hook kicks, getting Poirier to bite on them, then finished him off with a beautifully placed punch right behind his ear.

The second time around however, Poirier secured an early takedown, then once ‘The Notorious’ got up, ‘The Diamond’ started to get his leg kicks going. That was the downfall for McGregor in this fight.

So, what does he need to do differently?

We’ve got a few opinions from his fellow fighters:

“I think McGregor is very good in rematches and I think he’s gonna have (get) the victory. I think he’s probably gonna win in the second round, by knockout.” – Georges St-Pierre

“Three things that Conor McGregor needs to do: take the leg kicks off the table. I hope for him, he is training around the clock not to get leg kicked. Then after that, he has to keep the volume low. He doesn’t have to throw as many punches as Poirier.

“He has to keep the volume low. He has 25 minutes to get a killshot or he most likely loses the decision. Conor needs the distance. He fights really, really when when he is in his traditional martial arts stance.” – Firas Zahabi

“I mean, Dustin Poirier has been fighting pretty much the same way for the longest time. He’s got great boxing, good timing, he’s tough as nails, he likes to sit in the pocket, and he’s intelligent.

“I think he (Conor) kind of lost something in his last fight. I think it was all the boxing that he was doing. He doesn’t have that movement anymore that you normally saw.

“Like when he fought Jose Aldo, it was the movement that won him that fight. And he was kind of standing there in front of Dustin Poirier, and he took a lot of low calf kicks, and that’s what settled it, sealed the deal.

“And him being such a good counter puncher, (he) can counter off of that. So out of the two, Conor’s got to get back to that. So, don’t know how hard that is and how long he’s been doing the boxing stuff, but he’s got to get out of that and get back to his movement. If he can do that, Conor can win.”

3 fights against me for any man is an early grave. God bless 🙏

Poirier had the following to say in response: “Isn’t he the one who’s always preaching about the flow, the full martial arts, no holds barred, no rules, the ultimate fighting like when he’s talking about boxing and stuff. How about the first one to get taken down is a dusty bitch.. It reeks of insecurity to me.”

McGregor’s teammate, Artem Lobov, also had the following to say in regards to their rematch and trilogy: “To be honest, it wasn’t like he wasn’t fully focused or anything, he just probably didn’t give Dustin the respect he deserved. He was more thinking about boxing Manny Pacquiao after the fight and was getting ready for that as Conor saw that as the challenge and Dustin was just going to be a warm up fight.

“Obviously, it didn’t work out that way. Dustin did his homework and improved a lot.”

The only stand up fight McGregor had ever lost was against the greatest boxer of all-time, Floyd Mayweather Jr, in a boxing match. As we all know, there’s no shame in that.

McGregor did come into their last fight with all sorts of respect, as he did in the Cerrone fight, but it cost him this time. Now, McGregor is back to being ‘The Notorious’, and it’s very exciting to see.

Yes, he’s a dick again, but that may have been an important piece to his success.

For instance, he promised to donate $500,000 to Poirier’s charity prior to their rematch. Following the defeat, he never paid it up, and was called out for it. This started quite a storm between the two combatants, and they’re no longer friendly with one another.

Instead, McGregor donated that said amount to another Louisiana charity, funnily enough.

We’ll end it on this note, another quote from Poirier: “The good thing about this one is if it’s crazy Conor again, I just don’t give a fuck anymore. I really don’t care. And in the last one too, if he’d have been crazy, I’d have been alright.

“I think it’s gonna be crazy Conor again, I’m pretty sure. How crazy can you be (though)? You got knocked out last time. We put you on an airplane mode in front of the world, in Abu Dhabi. What can you say?”

Who wins this epic trilogy at UFC 264?