Elliott Hannaford is a young, exciting prospect from the U.K. and is determined to impress yet again this June at Fusion Fighting Championship 30.

Hannaford has previous experience competing at a professional level in K1 kickboxing, he has now made the transition over to MMA where he feels he has found his home.

I was intrigued to find out what made Hannaford persue MMA to which he replied, “It was probably the Jujitsu that got me into it more than anything else and just because it was in an MMA gym I thought I would try everything. The more I did it the more I started to watch MMA and the next thing I know I was fighting.”

Only three months ago, Hannaford entered the cage for the first time. Hannaford displayed a high level kicking game overwhelming his opponent eventually finishing the bout in the second round via TKO.

This memorable moment for Hannaford who described the situation as ‘surreal.’ He explained how initially he could not recall exactly what happened in the fight until rewatching at a later date.

Next time out, Hannaford is focused on being more aggressive and less hesitant as he felt in his previous matchup he held back on multiple occasions where he could have pushed forward to finish the fight.

Check out my full interview with Elliott Hannaford for the whole story! 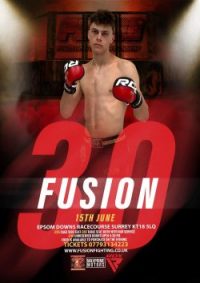