Gilbert Burns just had the toughest break of his career.

A few days ago, Burns (18-1) was removed from Saturday’s UFC 251 main event against Kamaru Usman (12-3) after testing positive for COVID-19. Now Jorge Masvidal will get the chance to fight for UFC gold instead of Burns.

The 33-year-old is now speaking out against his home state of Florida. “Durinho” told ESPN that in attributes the positive test on “The Sunshine State” reopening and people not wearing masks’ within the state. 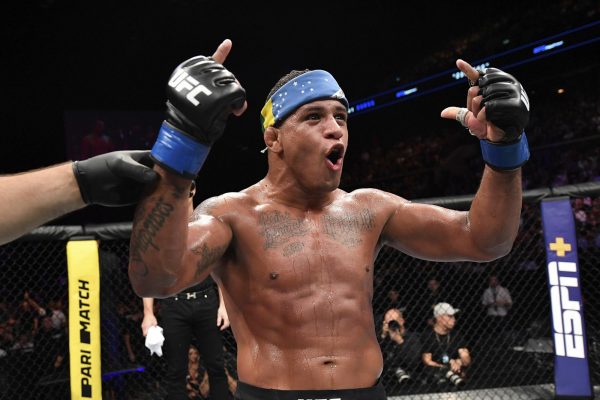 Gilbert Burns celebrating a victory. Burns was removed was this weekends main event after testing positive for coronavirus.

“The thing is that Florida opened up, that was the thing,” Burns told ESPN. “In Florida, people are not wearing masks, people are everywhere walking. So I think that’s how we got it. I think the first person that got it was Kenny, a Brazilian coach. After that we got Aung La Nsang – ONE championship champion. And then, a couple of heavyweights, and then it was me. And another guy just texted me; he’s out of an LFA fight because he tested positive, too.

Last week, Burns arrived in Las Vegas to take the coronavirus test, which he needed to pass in order to fly to “Fight Island” in Abu Dhabi. Burns said he took the test and following it he went to his room with a headache. The next morning he learned that he failed the test.

“The next day I woke up to a call from Hunter Campbell from the UFC,” Burns said. “He’s the one that gave me the news, ‘Hey, you tested positive. We’re going to run another test and after the second results we’ll go from there.’ Then I was waiting, and Khabib’s dad passed away, so we were caught up in the situation while we waited for results.

“Then I called Ali (Abdelaziz, his manager), and it was hard to get in touch with him because everything with Khabib’s dad. And when we finally talked, he was like, ‘Bro, a lot of people called me. What’s going on?’ And I said, ‘Bro, I tested positive. We’re waiting for the second test.’

“Then later the second test came and confirmed I had test positive, and at the same time coach Jones gets his results and test positive, too. So me, Vagner Rocha and coach Jones tested positive. My brother, who was in the middle of us (on the plane to Vegas), tested negative.”

Following the positive test, the UFC rented Burns and his team a truck to drive back to Florida in since they couldn’t fly while contagious. Burns is now back in Florida and says he is feeling good with no symptoms. He will remain in quarantine for two weeks.