Tonight, Mulcahy’s Pub & Concert Hall will be packed full of fight fans as The Beat Down 4 takes place under the Jackhammer Promotions banner. This nine-bout fight card will be sanctioned by the ISKA. The headliner is between Simons and Villela for the title. Ryan Gerena and Brock Morgan will also be battling in a featured bout. Doors swing open at 6 PM and fight kickoff at 6:45 PM eastern standard time. Make sure you sign up on Jackhammerfights.com to get all the newsletters we send out informing you of upcoming fights. 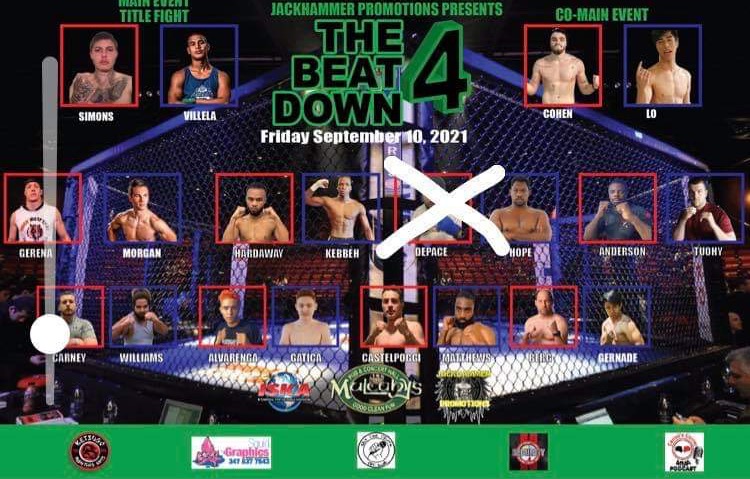 The fight card will host nine bouts on the eve of the September 11th, 20-year Anniversary. The main event is between Joe Simons and Jorge Vallela for the Jackhammer Promotions title.

In the co-main event, Theo Cohen and Brian Lo square up in a highly anticipated K1 matchup.

Ryan Gerena, an MMA star makes the crossover to kickboxing to fight rising prospect, Brock Morgan. These two fighters are stepping into the cage to prove to Long Island who the best is. Fans can expect fireworks between these two fighters and don’t be surprised if the fight ends early.

Tickets are still on sale and can be purchased at the door. If you can’t attend the fight card in person, be sure to visit Jackhammer Promotions official website www.jackhammerfights.com and purchase the PPV NOW!

The next show for JHP features the return of Bobby “Jackhammer” Campbell in a championship bout against Canadian, Jason “Mad Hatter” Hinds. Tickets and the PPV will be on sale starting tomorrow.

The PPV tonight will be commentated by Kyle Carroll of MyMMANews and Mike Basile, former Jackhammer Promotions middleweight champion. Don’t miss out on the action.