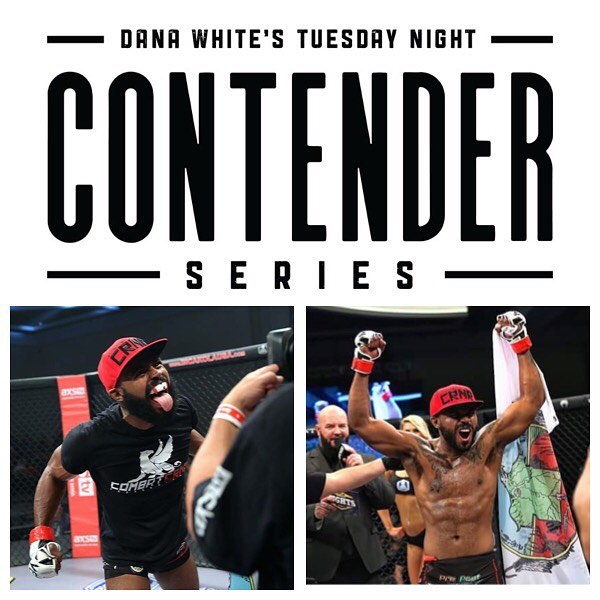 Jordan Griffin of Roufusport MMA is the latest professional mixed martial artist to get the call to compete on Dana White’s Tuesday Night Contender Series.

This is arguably the biggest shot of your MMA career, are you feeling any nerves?

“No. I’m excited. I finally got my opportunity to fight to get into the UFC. The guy I’m fighting is 11-1, but you’ve got to look at his record. You’ve got to really look at the type of fighters he’s been fighting and the type of fighters I’ve been fighting. I think we’re going to hit a point in this match up where it’s like who’s going to give up? Obviously, it’s not going to be me.”

How do you plan on impressing Dana White as he sits cage side?

“This is my UFC debut. Everyone is like this is you fighting to get into the UFC. No, this is going to be my UFC debut. That’s how I’m going to think about it. When I fought for King of the Cage I had the mentality I wasn’t fighting for a title, I was fighting to defend a title that was already mine. I’m going to show up to the Contender Series and just be me. The coaches, everyone has a lot of confidence I’m going to do well.

“I’m not letting that get to my head. I treat everyone like they’re a champion. I’m going to try to walk all over him to be honest. The fight is going to depend on which Jordan shows up. Sometimes I got that laid-back attitude and other times I’ve got that I just want to rip your head off mentality. Either one gets it done. I’ll be ready.”

You’ve mentioned this is the first time in three years you’ve been able to do a full fight camp? What improvements have you seen as a result of this?

“It’s really nice. I feel just naturally more in shape. I’m not stressed about making weight. I’ve been fighting every two months now for a while. This opportunity couldn’t have come at a better time. I think that really has to do with management. Jeremy Bjornberg from Stirling Entertainment Group, SEG, has done a really good job managing me and knowing when I’m ready.”

With rumors out that the UFC may be returning to Milwaukee sometime later this year or even beginning of next year it would be an excellent opportunity for you to get signed. I know you have quite a large fan base who would love to see you fight here in your hometown.

“That would be amazing. I never downplay anybody. I want to go in there, finish this guy, put on an exciting fight for Dana and the fans. I want to get my contract. If you ask anybody who’s close to me, anybody who really knows me, I’ll fight anybody, anytime, anywhere. As long as you got some money on the line. Once I win this, get my contract I’ll be ready at a moment’s notice. I’d love to fight in front of my people.”

You are someone who really stresses positive thinking. How has that shaped your career?

I’ve met guys on the road who are like, ‘Jordan I’m 1-2 now’ or whatever and they look all down and depressed. I like to remind them hey man, you’re here. I was 0-2 and then 1-3 when I started. Their eyes tend to get wide and they ask what I did to turn it around. The answer is simple. I just believed in myself. It’s really that simple.

“I stopped looking around and pointing fingers. I stopped blaming others for my mistakes. It’s about being accountable for your actions. I think that’s huge. I think you can take that mindset anywhere in life not just MMA. You can’t change others, you can only change yourself. If you want this lifestyle you’ve got to just fully believe in yourself. I’ve changed my attitude. I’m constantly evolving in and out of the gym. How you treat people, how you demand to be treated, looking at what needs to be done and taking the steps to complete it, it all matters. MMA has taught me a whole lot about life both in and outside of the gym.  I changed my record and gained multiple titles by believing in myself. Ask yourself what’s holding you back, be honest and then fix it. If you’re hanging out with the wrong people, if you’re not surrounding yourself with people with similar goals it’s going to be hard to find success. I think that’s been huge for me. I knew I was in the right space when I found Roufus. It’s been such a relief. Duke wasn’t lying if you put in the hard work, really grind, you will find success. Nothing is ever given. I believe in myself no matter what, win or lose. You’re going to wake up tomorrow. You better look at that tape and learn from it.

By Mike Pendleton 57 mins ago