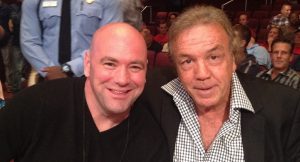 Louis Neglia is busy finishing up his final touches on Ring of Combat 57 scheduled for November 18th in Atlantic City, NJ. That won’t keep him from enjoying the tremendous UFC 205 card from Madison Square Garden this week.  There are four fighters on this epic card who have fought for Lou. He takes great pride in providing a forum for mixed martial artists to achieve their goals, including graduating onto the biggest MMA stage on the planet, The Ultimate Fighting Championship. Let’s take a look at the four gentlemen who paid their dues and now get a chance to show the world their skills.

Jim Miller who is facing Thiago Alves on the undercard, fought twice at ROC. In late 2007 and again in early 2008. He then fought once in the now defunct IFL before signing his first UFC contract. Jim has been a stalwart for the promotion. This will be his 25th fight in the Octagon.  This is an amazing achievement while going 16-7-1 and winning numerous bonuses for incredible performances. His resiliency and toughness are abundant as well as his talent. He and his brother Dan,who also is a  UFC veteran,  own and operate their own school, Miller Bros MMA. The Miller family has left a mark on both the local MMA scene in NJ and Pa, as well as the UFC. Jim is also a pleasure to talk to and a dedicated family man.  He is also one of the funniest men in the sport. Check him out on social media. You will not be disappointed.

Frankie Edgar is a former UFC champion and a lock to be in the UFC Hall of Fame someday. No time soon, because he has plenty left in his motor and is among the elite in the sport to this day. He fought for Lou at ROC in 2005 and 2006 going 2-0. Frankie can still be seen working corners or cheering on teammates in AC when he is not in camp for a fight of his own. It’s a shock to many but Edgar is on the undercard and taking on Jeremy Stephens.  With a victory, Edgar should be right back in the mix for a title shot. He has not ducked anybody and his resume is chock full of the biggest names in the sport. His cardio and wrestling has always been his trademark and going 5 rounds is another day at the office for him.  Don’t underestimate his ground game as he trains with Ricardo Almeida and Renzo Gracie who he has said are like brothers to him. Another class act and a wonderful representative of mixed martial arts. Probably my favorite fighter of all-time.

Chris Weidman is also a former UFC champion. His only career loss was losing his belt to Luke Rockhold in his last tilt in the Octagon. Chris’s first 4 fights were all victories at Ring of Combat, including a war with UFC vet Uriah Hall. At 4-0 he earned his UFC contract and went on to win his next 9 fights including 4 title defenses.

He can also be seen in Atlantic City regularly being cageside helping the young guys try to achieve what he has.

He is taking on Yoel Romero Saturday night in what almost everyone believes will be a battle that decides who gets the next shot at the championship. I’m sure he will be itching to get the taste of that first loss out of his mouth.

I expect a very focused and aggressive fighter this weekend who will be fighting right in his back yard. Chris was one of the most influential and vocal fighters to help New York state realize what they were missing and finally legalize MMA.

Eddie Alvarez is the defending 155 lb champion. He is taking on the biggest name and draw in the sport in Connor McGregor. This is the main event, in the most anticipated UFC fight card of all time, inside the most prolific stadium in the US.  Eddie fought his first 2 career fights for Lou Neglia at Ring of Combat. He has gone on to fight all over the world and now finds the largest stage, with the largest opponent staring him in the eyes. This is the greatest opportunity of his career as he tries to shut up the Notorious One and his legion of boisterous fans. He goes in as the underdog, a role in which he relishes.  He may decide to use his superior wrestling to win this fight, or not. Alvarez has been in some of the most memorable slugfests in history. At the end of the most anticipated night in the history of MMA he is hoping to hear Bruce Buffer say…and still…

Somewhere, Louis Neglia will be filled with pride and smiling. Not taking credit for their success, but proud that he was able to help these young men achieve greatness in a sport that is as grueling as it gets. Then he will be back to business getting ready for another ROC event just six days later.