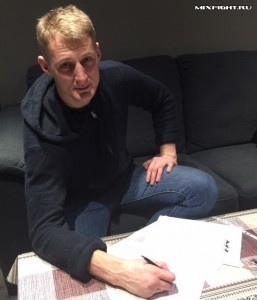 The 27-year-old puncher from Moscow returns to the organization in which he made his professional mixed-martial-arts debut April 19, 2009, needing only 80-seconds to stop Nikolay Pleshokov in the second stage of the M-1 Challenge 2009.  Volkov went on to capture top honors in the finals of the M-1 Challenge 2009, defeating Ibragim Magomedov for the Russian Team Championships.

At that point, Volkov had won 14 of 17 pro MMA fights and the popular Russian fighter opened 2012 with an impressive decision win over former UFC heavyweight champion Ricco Rodriguez.

Volkov had another victory before heading to the United States in order to test himself in Bellator competition.   He won his inaugural Bellator fight against powerful Brett Rogers, by decision at Bellator 75, in the Bellator Season Seven Heavyweight Tournament.

Two Bellator fights later, Volkov had extended his win streak to 10 in a row, improving overall to 19-3-0 via five-round decision over Richard Hale to capture the vacant Bellator Heavyweight Championship, as well as finish first in the Bellator Season Seven Heavyweight Tournament in Hammond, Indiana, USA.

In his first fight of 2013, Volkov lost his Bellator heavyweight title in his first defense, as fellow countryman Vitaly Minakov recorded a first-round knockout in Atlantic City, New Jersey, USA.

However, Volkov rebounded with three straight wins in the Bellator Season 10 Heavyweight Tournament, defeating Bulgarian great Blaygoy Ivanov in the final by way of a second-round rear-naked choke hold.  Ivanov is best known, perhaps, for defeating living legend Fedor Emelianenko in the semifinals on his way to winning the 2008 World Sambo Championships.

Feared as one of the most prolific strikers in MMA today, 17 of Volkov’s 24 overall victims to date were knocked out. 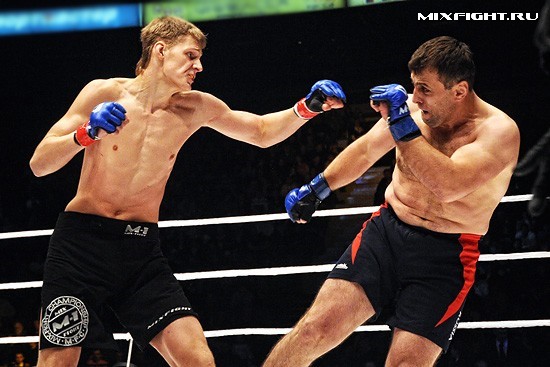 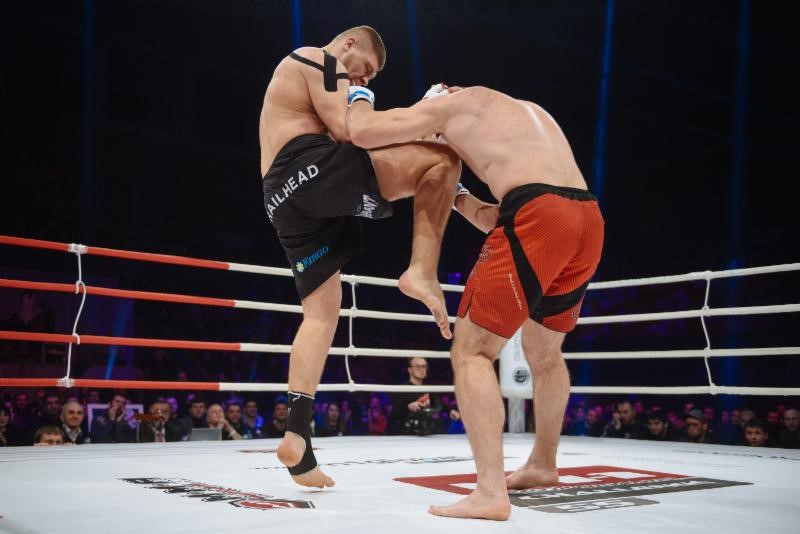 The 25-year-old Smoldarev (shown above in the black trunks) has impressive victories against Ante Delia, Maro Perak, Ahmed Sultanov and Shaban Ka.  Smoldarev is also a physical specimen, standing 6′ 5″ and weighing close to 270 pounds.

M-1 Challenge 64 will be streamed live from Moscow in high definition on www.M1Global.TV. Viewers will be able to watch the preliminary fights and main card by logging on to register at www.M1Global.TV. Fans may watch all of the action on their computers, as well as on Android and Apple smart phones and tablets.