According to social media posts from the family of Matthew Kline Kader, the well known professional bodybuilder has passed away. While details are still unavailable and there is no official death notice or obituary yet available, fans have taken to social media to say that the post is some sort of hoax.  Below is the tweet from a family member that posted to Kader’s Twitter account. 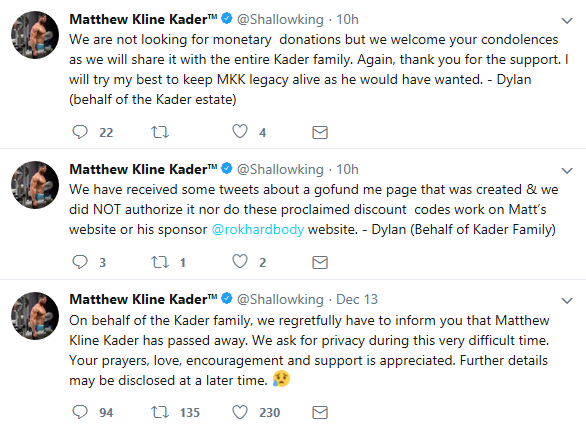 Kader who goes by the name “Shallow King” on Twitter, became well known throughout the mixed martial arts community when he started an online feud with then UFC bantamweight champion Cody Garbrandt.

Kader went as far as to say things about Garbrandt’s wife.  The two men agreed to set up a fight to take place at the Team Alpha Male Gym.  Kader allegedly showed up but Garbrandt was not there so the unsanctioned fight never took place.

Kader was born November 12, 1989 and represented the Rokhardbody fitness brand as one of their main athletes.

The bodybuilder became an internet personality with his online videos and taunts.  Below is one example where he held a “street fight” with a Conor McGregor fan.  Obviously staged, but attention grabbing nonetheless because of his large audience.