This Saturday, October 22, 2022, Medusa Female Only Jiu Jitsu will be having its third event at the Speaking Rock Entertainment Center in El Paso, Texas.

The event kicks off at 7:00 p.m. and features two 8-woman brackets – a combat jiu jitsu bracket at 125 pounds (flyweight) and a regular EBI rules bracket at 135 pounds (bantamweight).

There are a lot of familiar faces in both brackets as well as some new up and comers making their debut, so you’ll definitely want to catch the livestream on UFC Fight Pass. We also will have live results here at MyMMANews as the event progresses. 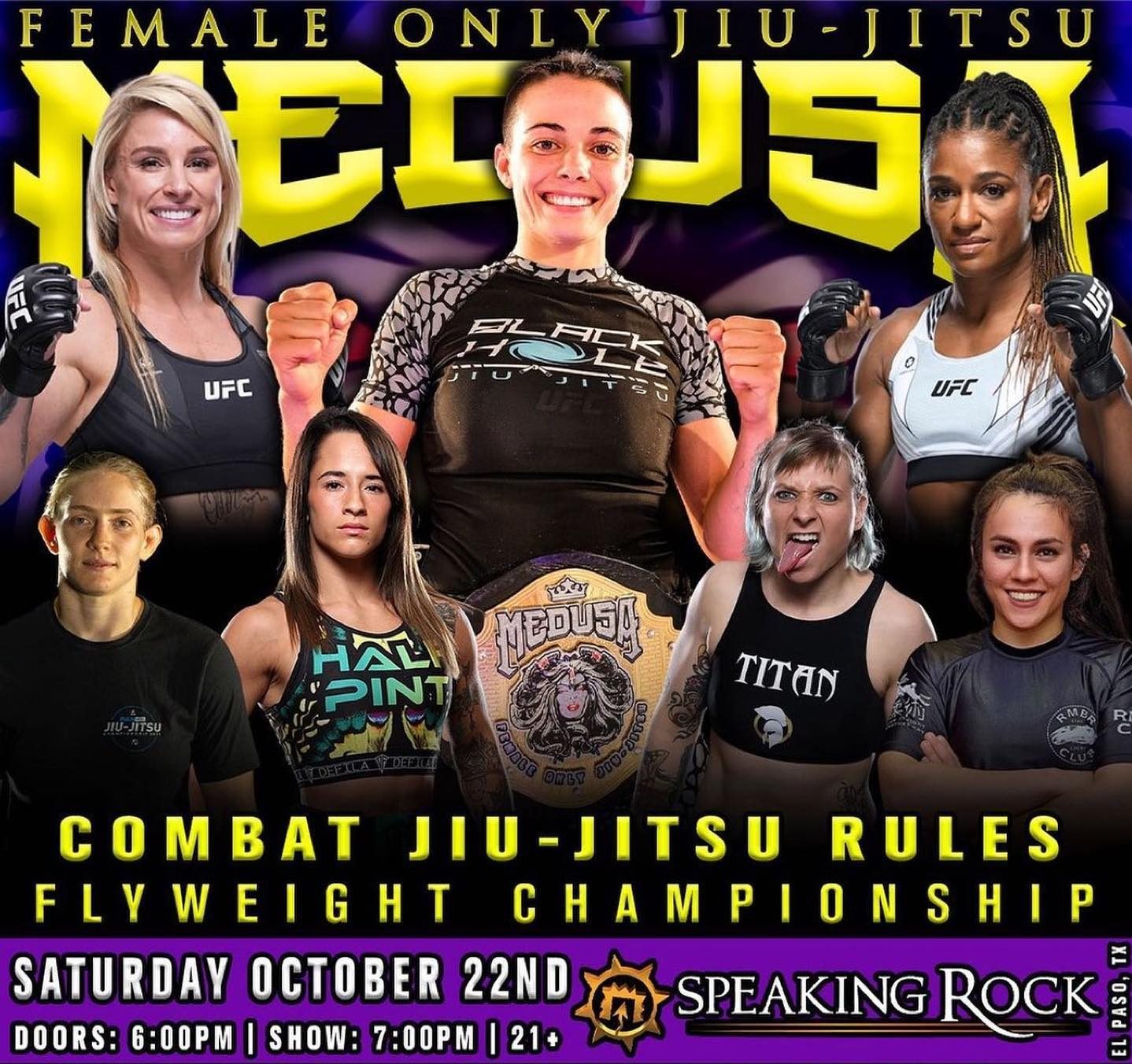 Some of the favorites in the Flyweight CJJ tournament include Fatima Kline, who was the 115 EBI Medusa Champion at the inaugural Medusa event and then jumped up two weight classes at Medusa 2 to compete for the 135 CJJ title in the second event. She made it to the finals at 135 before losing in a very close match to Aislinn O’Connell. Headed back down to 125, this is closer to Fatima’s natural weight class and she already has CJJ experience under her belt, so she could easily make it far this weekend.

Kiaya Jackson has also made an appearance in every Medusa event so far, making it to the semi finals of the first event and then making it to the finals again. Both were strawweight EBI tournaments, so this time she will be stepping up a bit in weight and adding in palm strikes will the match is on the ground.

Sheliah Lindsey will be making her Medusa debut but could arguably be another favorite, as she has won the Midwest Finishers Sub Only 3 times now, so she is no stranger to submission only. This will be her first time competing under the combat jiu jitsu ruleset. Another talented up and comer to look out for is Chrissy Briggs, who also will be making her Medusa debut. Chrissy has competed in the Finishers Sub Only, Midwest Finishers Sub Only, Emerald City Invitational, and almost any other jiu jitsu promotion you can think of, particularly out on the east coast. She is no stranger to high level competition and it will be interesting to see how she handles the addition of palm strikes on the ground.

The 10th planet qualifier winner, Bre Stikk, has been seen on the Medusa stage in the past as a special match winner and this time around she earned her spot in the tournament by taking out Kiaya Jackson in the finals of the qualifier. 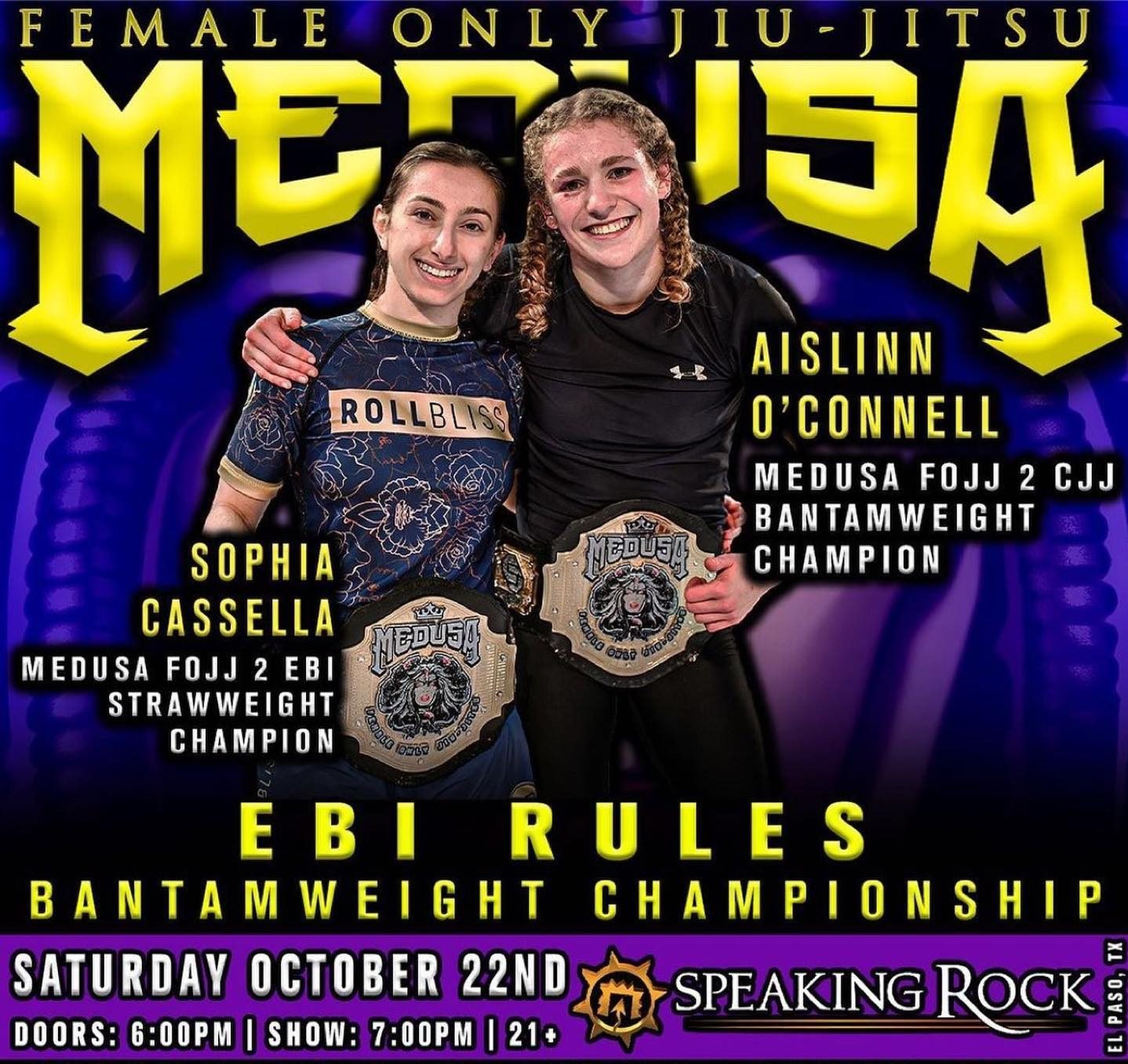 Moving on to the EBI 135 bracket, Aislinn O’Connell should be a familiar name after taking out Fatima Kline at the last Medusa event to earn the Bantamweight CJJ title. She now returns to the 135 division but with regular EBI rules. As Aislinn is not known as an mma fighter and is more of a pure jiu jitsu player, I doubt that taking away strikes will be much of a detriment to her game, so she likely will make it far and could easily become the first double champion, with titles at her weight in both EBI and CJJ rules.

Sophia Cassella and Trinity Pun, both hailing from the east coast, are also big names to look out for in this bracket. Cassella is already the strawweight EBI champion from the last Medusa event after taking out Kiaya Jackson in the finals by aoki lock. She also is the Finishers Sub Only Champion at 125 pounds but will be stepping up a bit in weight for this 135-pound bracket. Although she may be competing against slightly larger competitors, you would be wise not to count her out as she has some very slick submissions up her sleeve. This will be Trinity Pun’s second Medusa appearance after making it to the finals of the inaugural event in the 115 EBI tournament. She also has more experience going against opponents of this size, as she is currently the 145-pound Finishers Sub Only Champion.

Other competitors to keep your eye on include Joanie Chamberland, the 10th Planet Qualifier winner, and Peyton Letcher, who won the ADCC European trials last year. Rounding out the 135 EBI bracket are Claire North, who is an experienced black belt, Zelie Dolan, a blue belt from the B-Team, and Leticia Yuka.