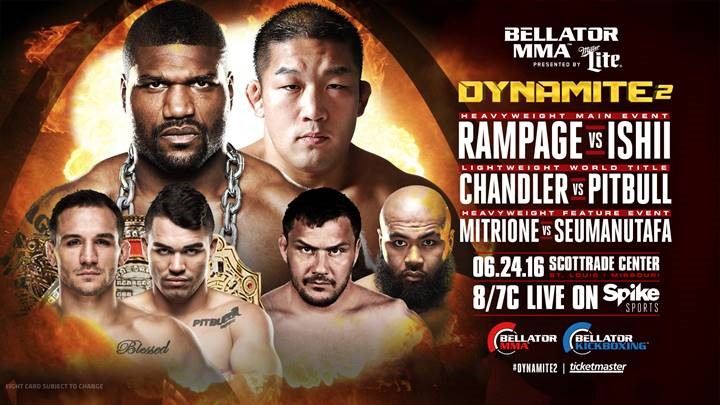 SANTA MONICA, CALIF. (May 14, 2016) – The Bellator MMA Lightweight Championship will be up for grabs “Iron” Michael Chandler (14-3) meet Patricky “Pitbull” Freire (16-7) in the co-main event of “Bellator: Dynamite 2” inside the Scottrade Center in St. Louis on June 24.

The title fight joins a main event that features a 215-pound heavyweight matchup between “Rampage” Jackson (36-11) and Satoshi Ishii (14-5-1), as well as a heavyweight showdown pitting Matt Mitrione (9-5) against Carl “Badwater” Seumanutafa (10-6). Much like the first iteration of Scott Coker’s “Dynamite” series, both a mixed martial arts cage and kickboxing ring will be featured on the arena floor.

The contests make up part of the televised portion of “Bellator: Dynamite 2,” which airs live on Spike at 9 p.m. ET/8 p.m. CT, while preliminary bouts will stream live on Bellator.com and The Bellator Mobile App. Additional contests will be announced shortly.

Tickets for “Bellator: Dynamite 2” start at just $30 and are on sale now at Ticketmaster.com and the Ford Box Office at Scottrade Center. Doors for the event open at 5 p.m. CT local time, and the first bout is scheduled to take place one hour after.

Chandler will look to replicate the success that he had during his first meeting with Freire at “Bellator 44” in 2011, when he went toe-to-toe with “Pitbull” before walking away with the unanimous decision victory. A 14-fight veteran of Bellator MMA, the 30-year-old lightweight has put together an impressive resume within the promotion, posting an 11-3 record and earning key wins over the likes of: Eddie Alvarez, Dave Rickels (2x), Derek Campos, and Marcin Held. The Missouri native will be making his 2016 debut with the hopes of adding to his current two-fight winning streak.

“Pitbull” has quickly strung together an impressive start to his 2016 campaign, with back-to-back wins over Ryan Couture and Kevin Souza. “Pitbull” most recently headlined the mixed martial arts portion of Bellator MMA’s inaugural event overseas, “Bellator 152: Pitbull vs. Souza” in Torino, Italy, defeating Souza via unanimous decision. The elder “Pitbull” brother will be making his 16th appearance under the Bellator MMA banner, a promotion that he has been loyal to since 2011. The Brazilian slugger eyes a third straight victory when he enters the cage with the hometown boy at Scottrade Center in St. Louis on June 24.

By Staff Report 44 mins ago

Cage Side Management: A family looking to make dreams a reality

By Doug Geller 21 hours ago